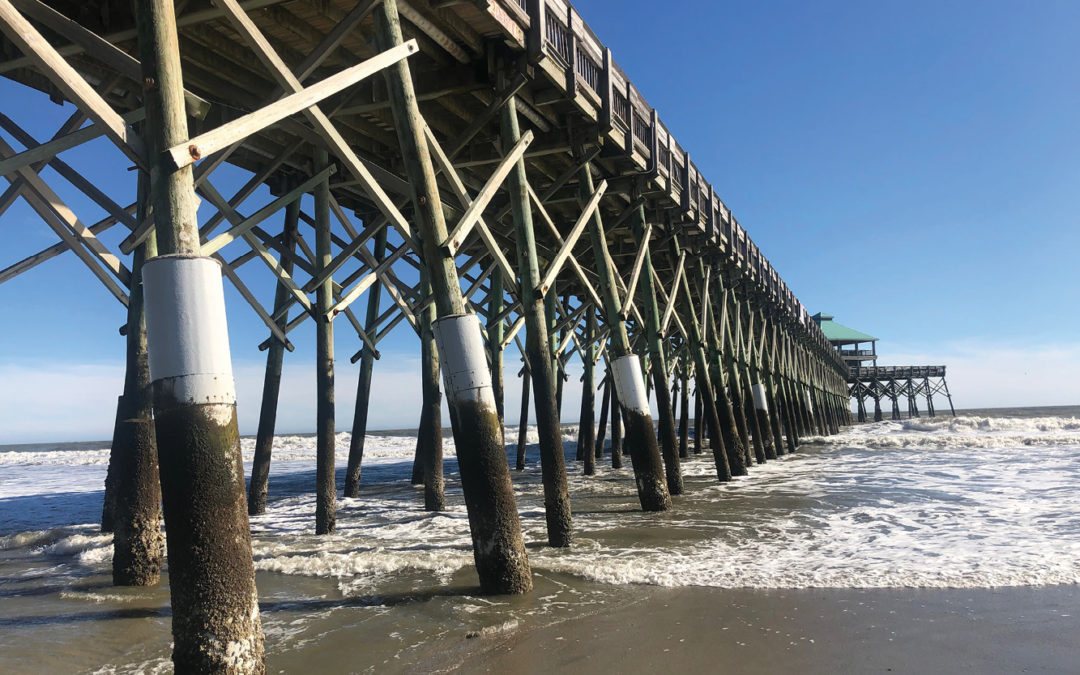 Folly’s pier is under attack by marine worms

The Charleston County government is in the “discovery phase” of replacing the Folly Beach Pier, while at the same time taking steps to repair damage done by sea worms that have bored into many of its pilings.

For years, the Edwin S. Taylor Folly Beach Fishing Pier has been a center of activity along the oceanfront. At just over 1,000-feet long, it also features a shop, a restaurant, and a 7,500-square-foot covered and two-storied diamond head end that has hosted all sorts of public events.

The county has recently encapsulated 44 of the piers 277 piers driven into the beach.

Renee Dickinson, a spokesperson for the county’s Parks and Recreation department which owns, operates, and maintains the pier, says the pier is nearing the end of its design lifespan.

She says that a pier such as this one has a lifespan of close to 25 years, and that facing ongoing maintenance issues, the county department is considering replacing it after the current damage is mitigated. Dickinson stresses that the pier is still perfectly safe currently thanks to the county’s repair efforts.

The only interruption to any of the pier’s offerings is that “moonlight mixers” will temporarily not be allowed to hold line dances. Dickinson says the county just wants to be safe.

Dickinson: “Our pile encapsulation process uses a fiberglass sleeve filled with a cement-based grout that surrounds the piling and extends four feet below the seafloor bottom and four feet above mean high tide.

Apparently, the grout accomplishes two things: one, it adds strength to the weakened pile due to the wood boring worm damage, and two, it cuts off the oxygen supply which kills the worms preventing further deterioration to the pile.

With an eye on future maintenance issues, Dickinson says the county is considering replacing the wooden pier with one made of concrete.

“We are looking into concrete because of the much longer lifespan it could provide,” says Dickinson. “The typical lifespan for a wood pier is approximately 20 to 25 years versus 65 to 75 years for concrete.”

But building with concrete brings with it more than a longer life: it brings much bigger costs. Whatever direction the county department decides on, the money for a new pier will be theirs, and Folly won’t have to contribute.

And should the county decide to rebuild the pier, it won’t happen overnight, according to Mike Murray, the president and owner of American Dock and Marine, located on Folly Road.

“It would take six months to tear out the current one, much less the additional time it would take build a new one, which would be much longer than that,” says Murray who surfs on Folly and fishes all over the area in addition to building docks and other projects along the coast and waterfront.

Typically, he says wooden piers are built with giant crawlers that build a section on land, and then reach out, drive home a post, lift the decking, its framed and then repeated. “Reach out, drive, lift, frame, deck, repeat, over and over until you’re done,” says Murray.

Murray isn’t so sure the pier is near the end of its design life. He says, thanks to new technologies and techniques, that there may “still be life in it, if they spend on maintenance.”

He says the section of its wooden posts buried in the sand will be protected from worms and from oxygen. Additionally, the length of the posts that are above the tidal zone – the height of the water from the sand to the high-tide point, could also be fine.

Maintaining and repairing posts, like Folly’s, costs “a pittance” compared to replacing an entire pier. He agrees a concrete pier would be a longer-lasting facility, but he doesn’t know if its cost is above the county’s choke point.

Replacing or repairing the pier was almost a moot point, according to Ben Peeples, the retired city attorney who served Folly for 40 years and now lives on James Island..But he said, there was serious discussion as to whether or not to rebuild it the last time, in the hazy mist of time.

“One-third of residents did not want the pier, while two-thirds liked the idea,” says Peeples, who remembers there was a local referendum on the matter even though the county was going to pay for it then, too.

“In my opinion, the decision to build the current pier has been completely positive,” the retired lawyer says, as it gave the island community an anchor around which more commercial ventures have since popped up.