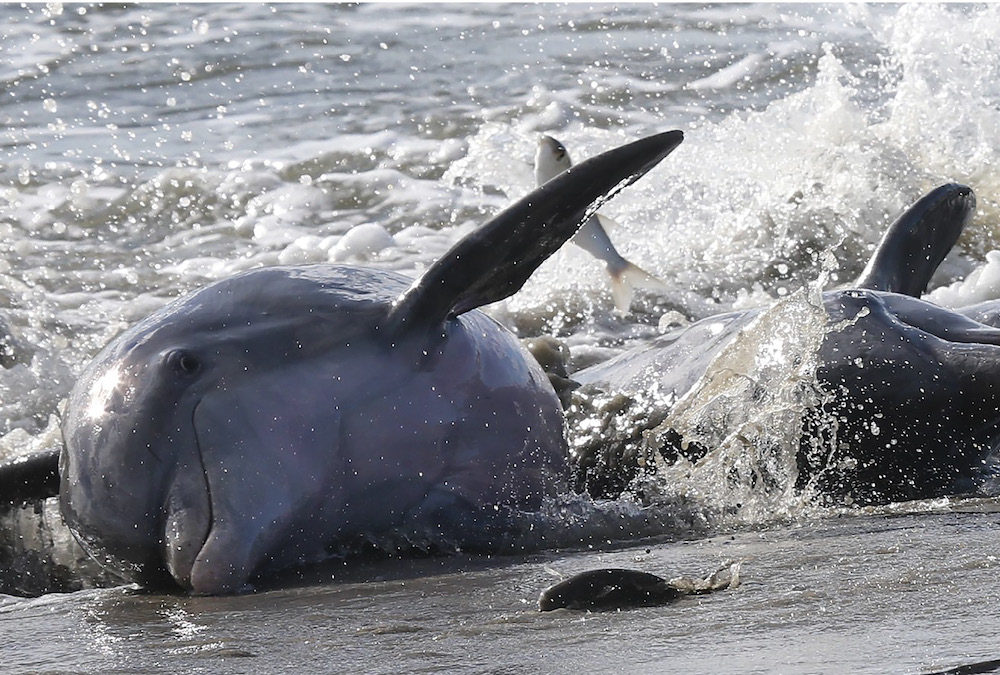 While Discovery Channel has practically made a national holiday out of Shark Week, local non-profit the Lowcountry Marine Mammal Network (LMMN) is hosting Dolphin Week April 22-26. It will include fun and educational activities raising awareness about local dolphins. Events will range from beach yoga on Folly to kayaking on Shem Creek. On Saturday, April 27, there will be a Dolphin Count, which is a one-day event where LMMN encourages the public to help count dolphins across the Lowcountry.

“It’s an opportunity for all dolphin lovers, young and old, to be a citizen scientist and help us collect data otherwise impossible to collect,” says Laura Rust, Executive Director of LMMN. “By having the community all count at the same time, we can capture a snapshot of the population, while also recording number of calves during the spring calving season and looking for behavioral hotspots.”

Participants can count from one of 10 designated stations or anywhere by downloading the Dolphin Count app on to your smartphone. All counting must be done from land during the specified times.

According to Rust, Folly Beach is a very important area for LMMN’s work for several reasons. First, most dolphins spend a majority of their time in a specific river and there’s a high number of dolphins that call the Folly River home. There is also a high number of people that spend time on the river in some type of watercraft.

“Because of this, the dolphins encounter hundreds of people daily. Without the community’s help in following the recommended viewing guidelines, the dolphins face constant harassment,” says Rust, adding that disturbances to dolphins can increase stress, which can cause illness, reproductive failure, and death. Dolphins are actually federally protected, which means it’s illegal to touch, swim with, feed, or harass them. LMMN strives to make the community aware of that to reduce human interactions. “We want the community to view marine mammals responsibly for the protection of this population,” says Rust.

The other component unique to Folly, according to Rust, is that dolphins strand feed around Folly Beach. Strand feeding  is when they push fish ashore to feed. It’s a unique feeding behavior documented in only a few places around the world, with Charleston being one of them.

“While strand feeding is amazing to see in person, this is a significant food source for some animals. Disturbing feeding dolphins causes them to abort their feeding and look for other feeding sources causing them to spend extra time and calories looking for food,” explains Rust. “Disturbing this behavior is not only stressful, it’s considered harassment and illegal.” She recommended not approaching feeding dolphins, viewing from at least 15 yards back, keeping movement and noise to a minimum and keeping dogs back. Dolphins are more likely to continue feeding if they don’t feel threatened by you. Yes, they can see you. And no dolphins do not like selfies, she adds.

“It’s important for locals and tourists to realize viewing wild dolphins is a privilege and not a media opportunity. We encourage locals to help us spread the word on the ground and be vocal to visitors that might not know the rules,” says Rust. “Be respectful of the dolphin’s personal space and view responsibly. Without everyone’s help, we run the risk of losing theses animals that rely on a safe, clean, and quiet environment to live.”

LMMN also partners with the South Carolina Marine Mammal Stranding Network in the response of sick, injured, entangled, and dead marine mammals across the state. “We respond to every animal reported to collect valuable information critical to understanding the health of the population and help with management of the population,” says Rust. “It’s important residents and tourists know how to respond to a distressed animal.”

According to Rust, never touch or push a stranded animal back into the water. And if a live animal is found, keep people and dogs away, keep the animal shaded and wet (no water in the blowhole), and call the SCDNR hotline (877-942-5343) about any animal, dead or alive) so they can respond and take appropriate action.