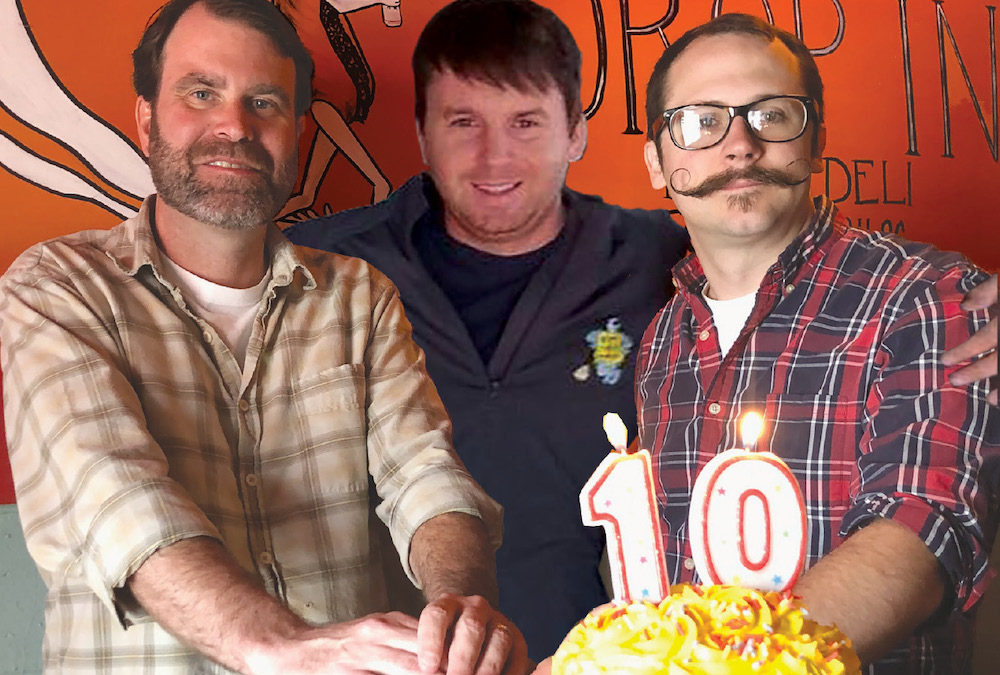 A 10-year high school reunion can be amusing and usually pretty entertaining. A 10-year marriage anniversary is considered an encouraging milestone in a couple’s love story. But a restaurant/bar celebrating 10 years in today’s ever-changing trendy food and beverage world? It’s almost unheard of, but that’s an honor that the Drop In Bar & Deli can now boast as of this month when they officially celebrate a decade in business.

It starts with a consistently fresh and delicious deli menu that you can have delivered to you anywhere on the island. Add in the tasty and diverse Sushi by Lisa bar that runs Tuesday-Friday, along with the rotating local and craft beer taps and you have yourself a recipe for success. There’s also live music with great local musicians, a trivia night, Honky Tonk Tuesday, and loads of other fun promotions. Basically, walk in on any given day or night and you’ll find a good time. “Folly Beach has changed a lot over the years since we started, but we always try to do something fun for the locals,” says co-owner Lewis Dodson, who also is part owner in Cannon Distillery, which is proudly served at the Drop In.

Dodson started the Drop In along with his friends and partners Gavin Lyons, Matt Loda, and Thomas Byers back in 2009. “We had all been working together at Woody’s for years so we already knew each other really well when the lease came up for the old Dolphin Deli,” says Lyons. “Loda had the idea we continue on in the space making sandwiches as well. It was done on a total shoestring budget but we worked around the clock and got the place opened in about a month, just in time for the Sea and Sand Festival.”

Dodson says they were all regular customers of the Dolphin Deli and when it closed their was a void, not only in the local dining scene, but in his belly. “I thought, who’s going deliver my sandwiches on a Saturday when the Dolphin Deli isn’t here? So we saw an opportunity and we said ‘let’s do it.’”

Things were not always smooth, recalls Dodson, who remembers opening amidst a recession the same year five other restaurants on Folly Beach opened. “The economy was tanking. Folly Beach was so dead that summer. And it took us a while to get our beer and wine and liquor license. For the first summer we didn’t even have liquor.” But Drop In weathered the storm while the other five restuarants are either under new ownership or have since shuttered their doors.

According to the Lyons, he thinks a big reason they have lasted while others have not is that it’s always been locally owned and operated. “It was started by guys who had been working and living on Folly for years and that still rings true today. Plus our staff has been great over the years. We’ve been lucky enough to hire some great people, which in turn also brings in great people,” he says.

A year or so into the venture Dodson, Lyons, and Loda bought out Byers and the three partners have kept the funky deli and dive bar going, each adding their own little touch.

Lyons takes credit for creating The Drop In’s most famous sandwich, The Redneck. A chicken philly “with Whiz,” add bacon, caramelized onions, jalepeños, and ranch dressing is quite possiblet the perfect sandwich.

“It was kind of a novelty at first and not on the menu but regulars would come in and order it. It gained a little more popularity and then the Charleston City Paper did a small blurb about it being one of the best hangover meals in the city,” says Lyons. “A little while after that we heard (celebrity chef) Sean Brock was at an event in town making the exact same sandwich with the exact same name. We don’t know for sure if he actually got the idea from us … but we like to think so.”

Loda can still be seen weekly hosting the island’s longest-running trivia game every Wednesday night. While Dodson doesn’t usually man the bar for Honky Tonk Tuesdays anymore, he recalls when he came up with the idea nearly a decade ago. “So that first year was crazy. I was working like 16 or 18-hour days. During those times, I needed some kind of relief. So I started playing country music just to get back at some of the hippies a little bit and maybe catch a breather,” he says laughing. “As it turned out people loved it and it became popular.”

Of all the ups and downs and crazy memories over the last decade, Dodson says that meeting his wife-to-be at the Drop In stands out as the most memorable. “We hired her just before we opened and six months later we started dating,” recalls Dodson. “Last week we celebrated one-year wedding anniverary.”

Speaking of anniversaries, traditionally a 10-year anniversary calls for a gift of aluminum or tin … we’re thinking go with an aluminum can of your favorite beer or raise a tin cup of something to toast to these guys at their 10 Year Anniversary Jubilee on Saturday, April 14, from 12-7 p.m., with live music from Red Cedar Review (1-3 p.m.) and Royal Tinfoil (4-7 p.m.) There will also be food and drink specials all day long.

Cheers to the Drop In for 10 fantastic years, and here’s to the next 10!

Jessica Cobb is a Folly Beach resident
with years of culinary experience tucked into her apron pocket. Classically trained chef and owner of local catering company, Some Like it Hot, she joins the Folly Current as a contributing writer to the Food and Dining section in hopes of sparking new interest, cravings, and insight from our eclectic bunch of restaurants.