All Quiet on the Folly Front 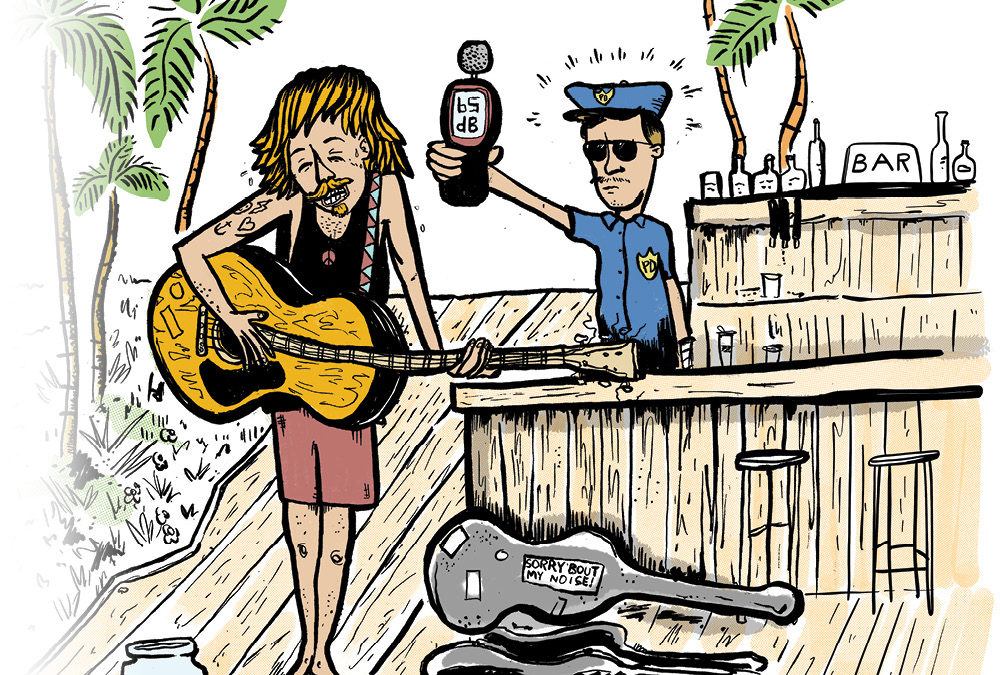 Folly is either about to get a lot quieter, or another step too close to becoming Isle of Palms.

On Tuesday, May 14, City Council will open debate for the second reading of a stiffer noise ordinance that would curtail live music and other sounds louder than 65 decibels reaching residential structures.

Currently, the city relies on the discretion of responding police officers to decide if someone, some house, or some business is making too much noise. The proposed ordinance would give a scientific limit to how much noise could be made without facing a stiff fine.

A normal conversation can range from roughly 50-60 decibels, and a hair dryer or vacuum cleaner rates 70 decibels.

The proposed ordinance would most likely directly affect restaurants and bars in the central business district, especially those that feature live music or deejays. It would also ban amplified music being played on the second floor or higher of a business.

Additionally, it focuses on quieting down houses rented for a short term for weddings and other celebrations, as it would outright ban outdoor amplified music.

“We are trying to protect everybody,” says Rich. “[The City] has received lots of complaints over the years, and we’ve tried several times in the past, but none of the past ordinances had any teeth.”

The proposed ordinance would levy fines of up to $500 for a first offense, and an additional fine of $1,087 for a second offense. Additionally, multiple or chronic violators could lose their business license with the city.

“We did not want this to be ‘the day the music died,’” says Rich. “We can all still have fun. We tried to be as fair to everybody. Ninety-percent of businesses are just fine, we all just need to tone it down, myself included.”

Rich says that if the City wanted to really crack down, they could have adopted the same noise ordinances as on peninsular Charleston, where fines are incurred because what’s going on inside a business could simply be heard outside.

Rich says he has already spent time over the past few weeks touring the business district with a decibel meter in hand and says most businesses have nothing to worry about.

Police Chief Andrew Gilreath says the “current noise ordinance in effect now is fine, from the perspective if that is the kind of ordinance you want, where council wanted an officer to determine on their opinion — but Council wanted one more easily enforced, more concrete, with a number attached.”

Officers will have decibel meters to go around, under the proposed ordinance, to check exactly how much noise is coming out of a business, house, or party.

But how exact can they be, as a total sound reading may be infiltrated by passing cars, a person yelling momentarily, a generator kicking on and grunting, all pushing the meter deeper into the red?

Gilreath argues for a common-sense approach where the officer would take multiple readings of a period of time. “And if the meter is bouncing to the music coming out of a bar …”

“Quite honestly, I do not think every bar puts out too much noise, but every bar has its loud times, from time to time,” says Gilreath, adding that everyone has had a chance to unsuccessfully “police” themselves on this matter.

Weed’s establishment offers music regularly and he would like to see the ordinance “tweaked,” especially in relation to the decibel level. He thinks it is too low and will negatively affect his business.

On the other hand, Paul Chrysostom, owner of the oldest business on Folly, Mr. John’s Beach Store, would like something done about not only the volume of music coming out of his neighboring businesses, but also the lyrics.

“I have no problems with bars having music, but when it spills into my business and I cannot listen to my radio in my own store do I start having a problem,” says Chrysostom. “My business is largely catering to families and in summertime there are kids walking around at 9 or 10 o’clock at night, and some of the deejays can be kind of foul.”

Ed Iames runs Loggerhead’s Beach Grill and would like to see members of Council get a fuller “education” on decibel levels before casting their votes. “One member came out of the last Council meeting saying, ‘I don’t know what 65 decibels sounds like.’”

Steve Carroll stands at the crossroads of all the businesses’ perspectives, as he is the current president of the Folly Association of Business (FAB). And he has a couple of problems.

The biggest one was access to the discussion that led up to the proposed ordinance. Carroll says that the City did not reach out to the business community for input, or a possible compromise solution where everyone could be happy.

And that means his membership didn’t know what was being considered “until they started counting votes” at the Council meeting. “Snapper Jacks has been there for a long time and never had a ticket” for violating the noise ordinance, says Carroll.

Chief Gilreath confirms there has been only one ticket issued in recent years for noise ordinance violations.

Carroll, who had previously been associated with The Washout and has been the past president of the Charleston Restaurant Association, wishes the city had a livability consultant to hash out some solutions.

“It has to be a compromise … it’s got to be a fair compromise before you go and change the way people make their living,” says Carroll. “Like to at least have some input or hear the discussion before they start reading ordinances.”

Additionally, Carroll wonders why the current noise ordinance couldn’t have been better enforced, the bad eggs identified and dealt with.

One of the businesses that’s garnered multiple complaints has been Snapper Jacks, which has music on its second floor and rooftop bar. Snapper Jacks is owned by a corporation, the Bottle Cap Group, headquartered in Charlotte.

Bottle Cap marketing director Morgan Conroy says her company is “still doing research” into the matter, adding part of what sets Folly apart in the area is a person’s ability to walk down the street, “hopping from bar to bar, seeing bands.”

If that were gone, she says, it would become a “missing element.” But, Conroy adds, her company is committed to working with the city and “be courteous” to the houses that surround their building.

Councilmember Rich hears all the concerns but reminds Carroll and others that the city “does not run through the FAB; it does its own thing,” and adds that FAB had representation in the process, “in that I am a member” and a still current business owner in addition to serving on council.