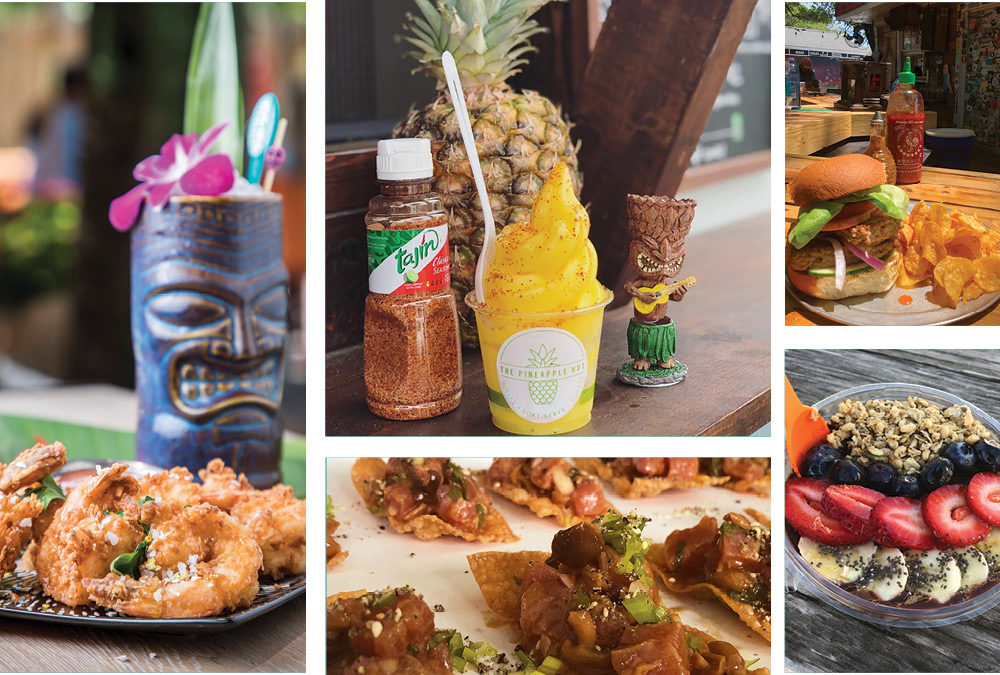 Hawaiian cuisine seems to be popping up everywhere, and I’m okay with it. When most people think of Hawaii, they picture white, sandy beaches … hidden waterfalls and volcanoes … and late-night Hula dancing around a bonfire.

Personally, I remember many a birthday party and swimming pool shindig that boasted big plastic palm trees and itchy leis, funky Hula girl straws in too-sweet cocktails and colorful floral outfits. Cuisine wasn’t usually the main thing that came to mind at these celebrations. But recently, many restaurateurs are making sure that they should be.

Interesting ways of slow cooking meat and fish, the celebration of luscious fruits and vegetables, and fresh innovative cocktails are just a few of the things that are making us aware of this whimsical type of food. When done correctly, they can transport you straight from our small island along the Atlantic to the Big Island in the Pacific.

We recently explored the history of Hawaiian food and its similarities with Lowcountry cuisine when the new massive restaurant and tiki bar Wiki Wiki Sandbar made their arrival on the Folly Beach food scene. They have since made a name for themselves by serving up their take on the PuPu platter, poke bowls, and of course Spam and smoked pork dishes in multiple forms. The tiki bar cocktail menu offers a variety of rum drinks with freshly squeezed juices and nectars. They’re even offering Sunset Room Yoga Sessions in one of their multiple private spaces as a way to fully embrace the coastal spirit.

But Wiki Wiki is not alone with this new-ish venture into the Polynesian food culture. Folly Beach has another new kid on the block with food/dessert truck The Pineapple Hut. Located at the corner of West Erie and Center Street, this small spot is serving up big flavors with super popular from Pineapple Whips & Floats. They even offer the addition of a sprinkling of Tajin, a seasoning blend of sea salt, lime, and chile that add a bit of spice to the sweet treat.

Owner Cody Brooks always had the dream to have his own business, and when the opportunity presented itself to own the Hut he jumped on it. He and his wife were spending most of their time on Folly anyways, and he felt that their love of the beachy atmosphere and people would pair perfectly with the vibe of their food truck.

Brooks agrees that the exciting trend of Hawaiian cuisine is becoming more popular because people appreciate the authenticity and freshness that it offers. Most Lowcountry locals know the significance of the pineapple and its ode to hospitality, but try having a delicious whipped dessert served out of one while strolling down the beach … now that is a fun and unique treat!

Chico Feo has also joined the movement by serving up some pretty tasty Polynesian plates. Known for its laid-back Caribbean style of food and service, it seems only natural to make the occasional slide over to another funky island’s type of fare.  Most recently, we saw a Huli Huli chicken over coconut rice, tako (octopus) poke, and the Wak-Wak, a pork burger with pineapple chutney and pickled turnip. While these aren’t necessarily staples on the menu just yet, we look forward to trying more new items like this now that summer is nearly here.

The Juice Joint food truck also offer a host of Hawaiian acai bowls. Made from frozen acai berry sorbet, these colorful bowls are topped with an array of fruits and nuts.

If you venture off Folly Beach, you’ll see this Hawaiian trend continuing. Just a few miles away in downtown Charleston, you’ll find places popping up such as Maui Tacos, a counter-service restaurant that fuses Hawaiian and Mexican fares. Poke Tea House on Meeting Street and Poke Bros. in North Charleston are also offering eclectic island tastes such as sushi-grade raw fish bowls and bubble tea. So while this Hawaiian invasion may not be exclusive to Folly, it certainly feels right at home here. I don’t know about ya’ll, but for me a big bowl of fresh seafood and veggies, followed by a chilled, fruity Dole Whip sounds just about perfect as this weather heats up. Either way, we’re excited about these new foodie experiences and hope you venture out to try some “ono grindz” as well. Mahalo y’all!