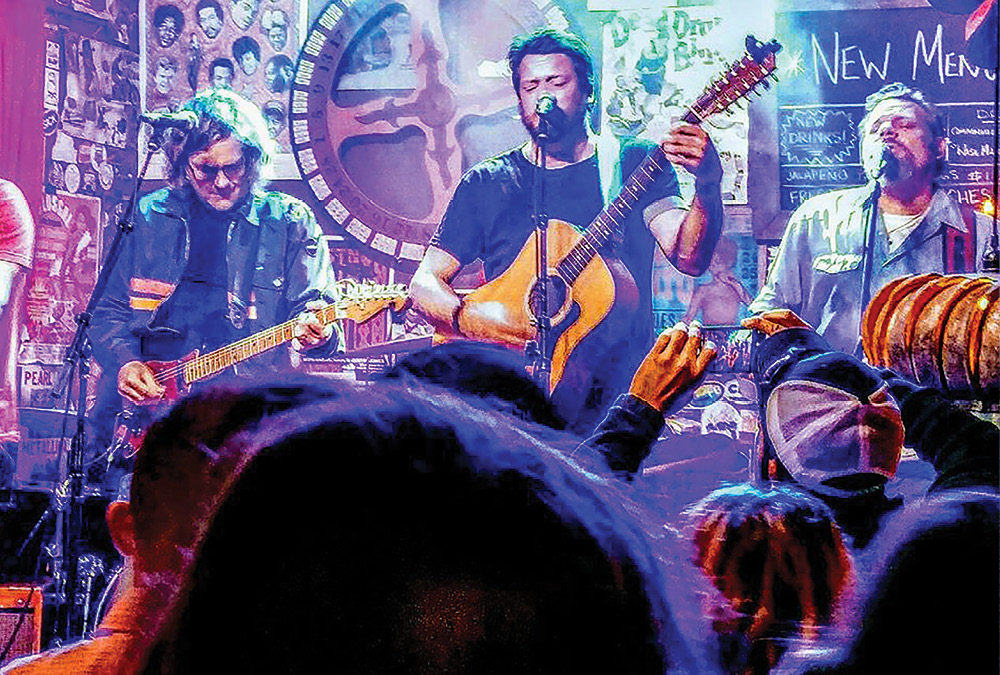 Local rock group Ashes of Old Ways have been heating up the music scene since 2015 with their eclectic sound that fuses rock, bluegrass, and folk. Singers and songwriters Bobby Sutton and Dave Britt first met when Sutton moved to Charleston from Columbia and the two started playing music around town together at bars including Cha Cha’s Mexican Grill and St. James Gate. The band has become a fixture on the Folly Beach music scene in recent years.

Sutton met bassist and Folly resident Jamie Crisp from Big Stoner Creek at Planet Follywood and admired his authentic bluegrass style of playing bass. Then they met Cre Moore, who comes from a musical family. His brother Stratton is a well-known musician and is the drumer in a variety of bands and plays every Thursday at Drop In Bar & Deli with a rotating lineup of local musicians. Cre was recruited him to play drums for Ashes of Old Ways as was guitarist Adam Gould and keyboardist Alex Goyette. Over the last four years, Ashes of Old Ways have recorded two albums and toured throughout the Southeast.

Britt describes Ashes of Old Ways sound as, “Somewhere between the music of Tom Petty, Jason Isbell, and The Grateful Dead.” Britt was inspired by the unique sounds of artists like Bob Dylan and Band of Horses. He first fell in love with music when going to see live bands in high school and started his event and festival promotion company, Solid Entertainment Group in Columbia in 1997.

At a Green Party fundraiser in Columbia, Britt played at Café Strudel with Isbell, whose music has been influential to the band. Ashes of Old Ways has performed live at local festivals including Taste of Folly, Follypalooza, and Folly Gras. They also performed at The Healing Hearts fundraising concert with Dangermuffin last summer at The Washout.

Ashes of Old Ways is back in the studio recording a new album, From the Ashes Part 2. The band has been busy recording new music at Coast Records recording studio, run by Royal American sound engineer Matt Zutell, who also plays in Human Resources.

“When writing music with another person, they can help push you through a creative block,” says Britt. As the primary songwriters for the band, he and Sutton usually write individually. But they collaborated late one night after a show at Surf Bar while sitting on Sutton’s porch on Folly Beach. They had reached the bottom of a bottle they were drinking and therefore the single was entitled “The Bottom of the Bottle.”

The band then spent a lot of time constructing the track to create an instrumentally complex tune. “Here we go again … sunlight’s breaking in and I’m back to the bottom of the bottle … fill it up again.” Britt and Sutton also collaborated when writing the song “Living in the Present Tense.”

The group performs at The Charleston Pour House on July 25. They hope to release From the Ashes Part 2 this fall and book a small tour throughout the Southeast to promote the album. Ashes of Old Ways practice right here on Folly Beach, in a musical lounge underneath the ground adorned with instruments of all kinds, including a standup bass from the Grand Ole Opry in Nashville that is over 100 years old. The jam cave is also an inspiring space for Jamie Crisp’s wife, local painter Shelley Crisp, to create her own original works of art. Jamie also plays in the rock group Big Stoner Creek with singer and songwriter George Fox. Catch them at Surf Bar Friday, June 7 and Saturday, June 8.