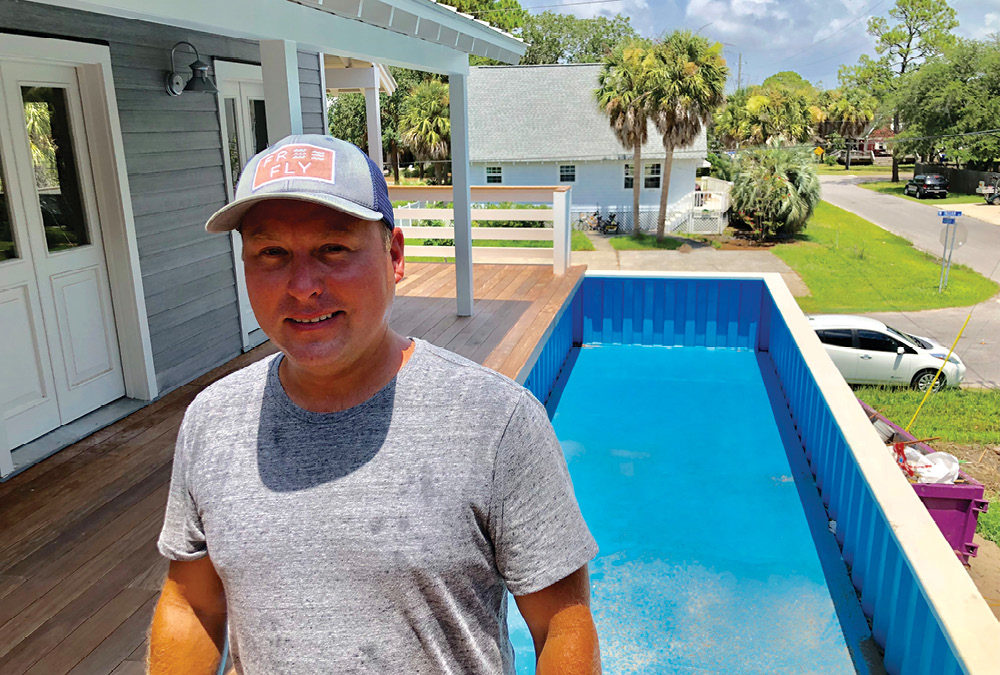 There is no way Mayor Tim Goodwin will allow trailers to come back to Folly Beach, or apparently anything that reminds him of them — like container units.

Goodwin is backing a proposed ordinance that would block container units  — the big metal boxes used in international shipping — from being used in the construction of a primary or “accessory” structures on the island.

“Accessory” structures would include using smaller ones as sheds, or even bigger ones from being converted into small, single apartments.

That ordinance will be up for a public hearing where residents can be heard on the second Tuesday, Sept.10  after the Planning Commission and the planning department gets to whack the ordinance around for a month.

When asked if it was the previous use of the containers, or their corrugated appearance that bothered him the most, Goodwin is holistic in his response. “All of that … all the above,” he says.

“We don’t have any mobile homes on Folly, and have not had them for years; [allowing container units would be] just taking a step backward going that way,” Goodwin says.

His concern was piqued by the construction of a house a few blocks from his W. Indian Avenue home that included the use of two container units in its construction. One 20-foot unit sits on the bottom supporting a 30-foot unit that serves as a deck-height wading pool for the house.

That house won’t be affected by any resulting ordinance, as it would come after the fact. Goodwin says there wouldn’t be as much concern had the bottom trailer not been situated where its industrial doors faced out toward the street.

But far from being anything destined for a trailer park, the house, designed by local Jason Kappa, would likely sell for north of a million dollars. It’s stunning, according to several locals who’ve toured the house.

Originally, the small bungalow used to reside where Wiki Wiki Sandbar now stands. Kappa had it cut from its moorings, trucked down the island, and erected it atop of storm-resistant piers.

Inside, its replete with airy light and subdued hues, glassed-in showers, and shared sleeping areas.

Kappa first riled locals a few years ago when he designed the “fish bowl” house that runs street-to-street on E. Ashely Avenue. That house seems to incorporate three separate beach singles in the back, with huge front and roof decks, and is currently valued well north of $1 million.

Change, according to Kappa, can fill people with fear. But, he says, if given a chance they tend to come around once they see the finished product.

Kappa holds that his use of container units is no way “trailer park-y,” and that there are other “really pressing eyesores” dotting the island that should be getting attention over his latest million-dollar house.

It doesn’t take long driving around Folly to spot houses who’ve employed container units as backyard sheds. It could be argued that untethered, these could float away in a storm surge, slamming into others’ house and structures.

Kappa worries that any ordinance blocking container units being used in an architectural manner could cut off a future business opportunity for him. Other homeowners may become interested that a container pool cost as little as one-third of the cost of an elevated above-ground pool in a “Costal V” zone area or one designed to withstand hurricane FEMA design criteria

.“For me, it was just a solution,” says Kappa, who expects his latest project when it’s completed to be called the “pool house.”

Last month, City Councilman DJ Rich voted against the ordinance being sent to planning saying that people should be left alone and allowed allowed to do what they want with their property.

“The way it’s designed, it looks nice,” says Rich, who sides with the rest of the architectural community in that container units should be repurposed. He points to the refrigerated units used for storage at Bowens Island Restaurant as a low example of potential uses.

Councilwoman Amy Ray says the city has to look forward on anything it allows to be built on the island. “It’s a beautiful house, it’s tasteful, and it’s been redone well,” says Ray, but adds that the city has to act proactively, for once, on potential hot-button issue instead of keeping to its practice of being reactive. “I’m glad it’s been remanded to planning,” says Ray.

They mayor says one of his constituents says he is going to put “four container units in his front yard. And I said, ‘No, you ain’t,’ and he said how come, and I said, ‘‘Cause your wife isn’t going to let you.’”