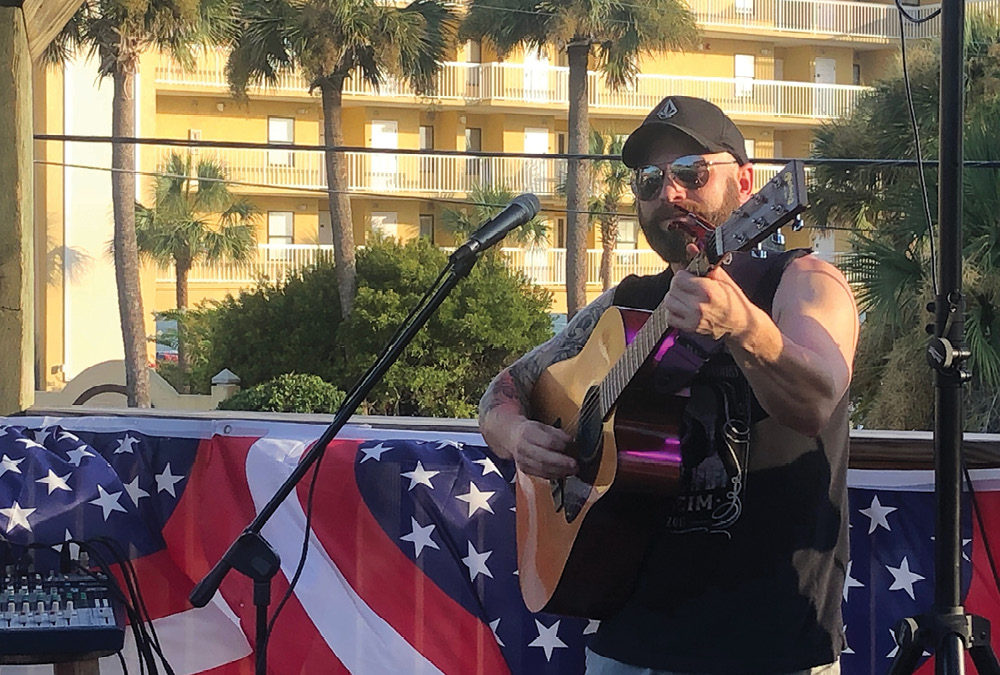 ocal singer and songwriter Nathan Calhoun has been busy in the studio recording a new album he anticipates to release this month. On the self-titled album, Calhoun sings of carefree Charleston living as well as his humbling experience of surviving cancer. Calhoun has been playing with the local indie alternative rock band Calhoun’s Calling since 2008, but he has recently drifted away from covering other artists’ songs to tell his story.

Calhoun first began playing guitar around 13 and performing live when he was 25. He teamed up with saxophone player Andy Childs here in Charleston to create Calhoun’s Calling. The duo met at the now-defunct Island Bar & Grill on James Island, and currently plays at Loggerheads Beach Grill on Thursdays and at The Folly Beach Crab Shack every Friday.

Saxophonist Childs, who also plays electric guitar solos for the duo, graduated from the jazz music program at The College of Charleston and considers Charlie Parker to be one of his biggest musical influences. Their nouveau sound has made Calhoun’s Calling a regular at the Crab Shack for the past decade and a local favorite for live music on Folly. “Our sound is different enough that it keeps things interesting. It separates us from other bands and is probably why we stay so busy,” says Calhoun.

Calhoun’s single “Carolina Breeze” recently caught the attention of the producers of the HGTV show House Hunters, who aired an episode filmed on John’s Island last month. Calhoun wrote the tune right when he started treatment for stage four cancer. Despite losing most of his left lung, Calhoun plays on.

“It really hasn’t stopped me from doing what I want to do,” explains Calhoun. In 2010, doctors gave Calhoun four to six months to live. Instead of giving up, he turned to his music. “It’s still very surreal to me that I’m around,” Calhoun stated. He wrote the track Screen Door during a time when he felt the worst towards the end of his treatment. Calhoun underwent a revolutionary treatment using TIL cells. His survival made history by marking one of the first successful uses of this new treatment. “It’s humbling to be a part of something a lot bigger than yourself,” admits Calhoun.

Calhoun’s Calling played the first Follypalooza right when Calhoun was first diagnosed with cancer, in addition to other local festivals such as Folly Gras and The Charleston Outdoor Festival. Aside from music, Calhoun is passionate about physical health and works as a personal trainer at Bishop Gadsen Retirement Community.

In addition to the duo, listen for Jared Kerns and Tom O’Brien on drums, as well as Chris Vierra on bass on the new album. The group enjoys playing alternative rock songs from the ’90s, yet with a unique jazz feel. Hear them play a wide-range of artists from Johnny Cash to Sublime and Jack Johnson. Calhoun was stoked to play the Sublime Pre-Party show at Dockery’s on Daniel Island preceding Sublime’s performance at Volvo Car Stadium late last month.

Every Thursday in August, Calhoun will play in the evening at Loggerheads from seven to ten in the evening. Catch Calhoun at Crab Shack every Friday in August from 8-11 p.m. He travels down to Edisto Island on Saturday, Aug. 17 to play Dockside Bar & Grill and you can catch them at The Firefly Distillery on Johns Island on Aug. 31.

In addition to being regulars on the Folly Beach music scene, Calhoun’s Calling also regularly plays The Roost in West Ashley and can occasionally be heard at other local venues like Ink & Ivy, The Music Farm, and Republic in downtown Charleston and The Windjammer on Isle of Palms.