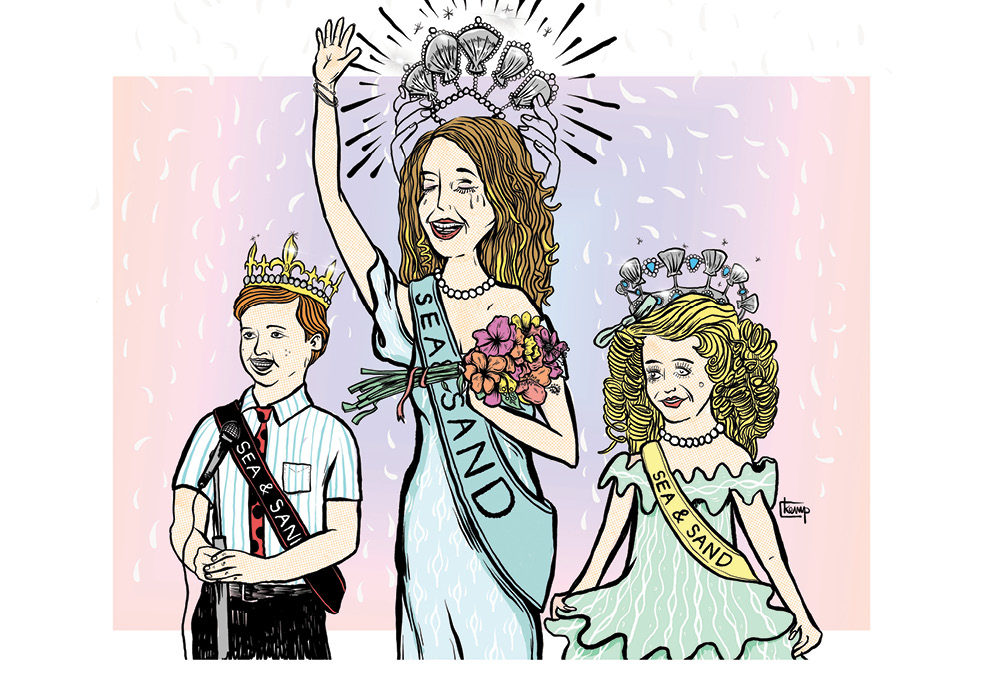 Six years ago, the Sea & Sand Festival was looking for a Friday night event to complement the festival. Folly resident Andrea Weathers suggested a nearly 100-year-old tradition in South Carolina — a pageant.

“I have experience with pageants. I have three daughters, two of whom were in pageants,” said Weathers. “I thought it would be a great idea to have our own pageant — South Carolina is huge with pageants.  Almost every town, big or small, has a pageant with their festival.”

It was decided that The Folly River Park, across would serve as the location and contestants would compete in just one event: an evening wear competition that concludes with the crowning of Miss Sea and Sand.

Organizers got creative with a “uniquely Folly” solution for the venue, which has no backstage area.

The contestants use the Folly Beach Community Center and Library across the street as a changing area and ceremoniously walk across Center Street when the competition begins.

“One of the fun things is that we always have a Folly Public Safety Officer accompany the contestants on the crosswalk across Center Street,” said Weathers. “Lots of people take pictures.”

Over the past six years, the pageant has grown to include nine total age groups, including a recently-added boys’ competition.

“I added the ‘Little Mr.’ category last year at the request of interested families,” said Weathers.

Anyone is welcome to enter the competition. It is not limited to Folly Beach residents.

Similarly, everyone is welcome to attend the pageant free of charge. Aside from watching the competition, there is also beach music and dancing and a chance to mingle with residents and visitors.

The Folly Current had a chance to chat with Weathers about the pageant’s history and how to get involved, either as a contestant or spectator.

Folly Current: What about the pageant is uniquely “Folly?”

Andrea Weathers: It’s the only pageant held on Folly Beach. The Folly River Park at sunset is really pretty overlooking the Folly River. It is also one of only a few outdoor pageants.

FC: What are the duties of the winners?

AW: The winners are required to appear and/or volunteer the next day at the Sea & Sand Festival while wearing their crown and sash. I encourage them to volunteer at the Civic Club’s annual Halloween Carnival, ride in the Folly Beach Christmas Parade, volunteer at Taste of Folly, and with Surfer’s Healing. I believe it is important for young people to learn how to meet and greet and volunteer for the needs of our community. Awareness of the needs of the many local organizations is crucial to fundraising and living our lives to serve others in need.

FC: What were some memorable years/contestants?

AW: One year, we had the pleasure of Miss South Carolina USA in attendance. The contestants and audience loved her. There are many memorable queens who truly appreciated the title and volunteered at several of our Folly events. Some are Jamie Kay Cooner, Kaylen Simpson, Marley Johnson, Sydney Duke, Katie Ward, Katie Larson, Tiffany Takacs, Shyann Loomis, and Jessica Kirby.

FC: Is there a charitable element to the pageant?

AW: es. The Sea & Sand Festival is a charitable event to raise funds for Folly Beach projects, like children’s playgrounds.  I encourage the winners to volunteer at all of Folly’s public events, which are always fundraisers.

FC: How has it changed or evolved over the years?

AW: The first pageant only had four age divisions, Jr. Teen, Teen, Miss, and Ms / Mrs. I added more age divisions over the years because we had so many contestants that I wanted to crown more winners. We have nine age divisions now. I wish I could crown every contestant!

FC: How does someone enter? What is the age limit?

AW: A person may enter by contacting me for  information and the application. I need the signed paperwork, photo and a $60 fee by Monday prior to the pageant. There is no age limit for female contestants. I have a ‘Mrs.’ which is for any age female, as long as they are married. There is a category from age 4 and up for females. The “Little Mr.” division is for boys ages seven and under.

FC: What is the order of events?

AW: Contestants arrive at the Community Center after 6 p.m. which then becomes our dressing room. Contestants check in and walk over to the Folly River Park for a brief rehearsal. Then, it’s back to the dressing room. The pageant begins at 7 p.m. The pageant opens with the introduction of the host, the judges, auditor, and reigning queens. The competition begins with the youngest. They walk onstage for about one minute while the MC reads their bio. After all contestants have competed, score sheets are added while the dance area is open to those who wish to demonstrate our state dance, the Shag, while beach music plays.

FC: Who are the judges?

AW: The judges are different every year. I always ask a current / past title holder of  a preliminary pageant and I choose other people who have no connection to the contestants.

FC: What are the judges looking for in a winner?

AW: We are looking for a confident on-stage personality and someone to represent Folly. They walk, smile, and twirl during their one minute on stage. I work with them at a quick rehearsal with their on- stage presence and their walk.

FC: What do the winners receive?

AW: The winners are crowned with beautiful rhinestone crowns, custom embroidered sash, rhinestone crown pin, and a bouquet of flowers. We have participation trophies and flowers for all other contestants, runner up certificates, a Donny Wilkinson Spirit Award certificate and an overall Miss Photogenic Award certificate. After crowning, there is a brief meeting about the festival on Saturday and photos are taken. Last year, the Folly Beach Association of Business gave all contestants, plus one, free admission to the festival.

FC: Why do you choose to head it up?
AW: I love everything about it, including the integrity of the contestants and their families. These are young ladies who are serious about succeeding in life and becoming the best version of themselves. They are motivated to succeed and are passionate about their service to their local communities within the state and beyond. Many compete at the state level and win national pageants. It’s just a really fun pageant. It’s a great “first” pageant for someone looking to compete in pageants.

The sixth annual Miss Sea and Sand Pageant will be held Friday, Sept. 20 at 7 p.m. at the Folly River Park. It’s free to attend with music and dancing. Divisions are: Tiny Miss (ages 4-5), Little Miss (ages 6-9), Junior Teen (ages 10-13), Teen (ages 14-17), Jr. Miss (ages 18-20), Miss (ages 21-25), Ms. (ages 26 and up), Mrs. (any age, must be married), and Little Mr (boys age 7 and under).  Additional awards include the Donnie E. Wilkinson Spirit Award and Overall Miss Photogenic Award The competition is open to anyone; contestants don’t have to be Folly Beach residents. To enter, contact Andrea Weathers at (843) 729-9196 or email aweathers@carolinaone.com. For more information, check on the pageant’s Facebook page @seaandsandpageant