For the Love of Beer (and Goat) 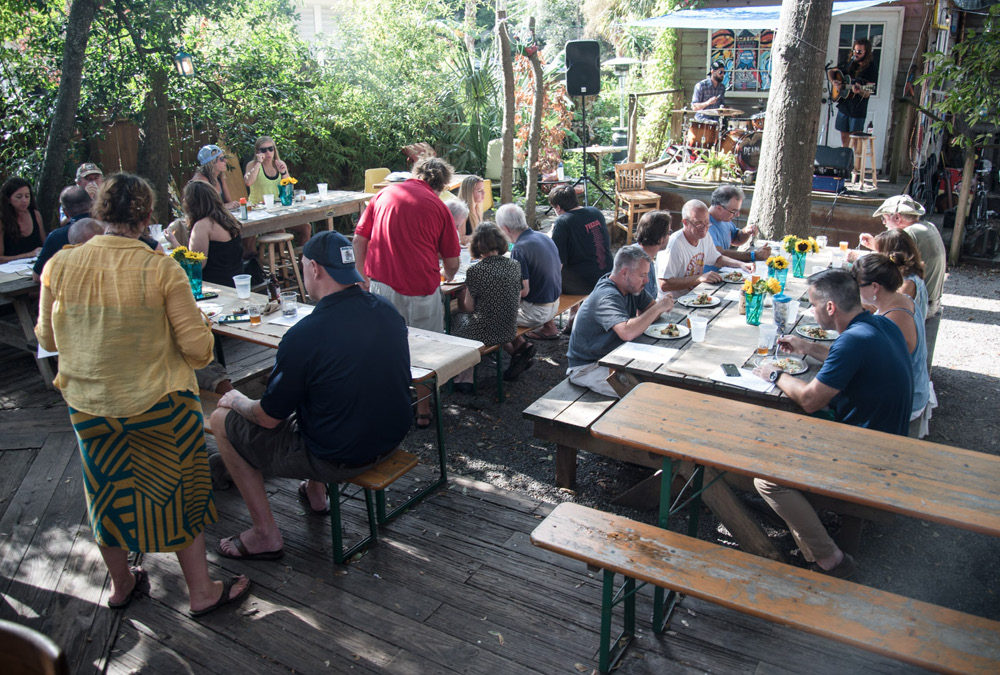 The weather has finally given us a couple of cooler days and nights… the kids are back in school… and Folly Beach is starting to see a calmer side to the island again. But that doesn’t mean the fun foodie events are over. In fact, they’re just getting started! Right around the corner you’ll find a couple of yummy options to RSVP to.

First up: Original Pub & Brewery Tours of Charleston is once again teaming up with popular Folly eatery Chico Feo to host a Folly Craft Beer Dinner from 3-5 p.m. on Sunday Sept. 8 as part of Charleston Beer Week, which involves several events across the Lowcountry Sept. 7-14.

Original Pub & Brewery Tours of Charleston was founded by local Folly residents Daniel & Becca Lesesne 10 years ago out of their passion for craft beer and the elaborate history of the Holy City. This husband and wife duo has nearly 30 years of combined experience in leading fun and educational tours around Charleston, so suffice it to say they have plenty of love for what they do and they do it quite well.

Becca says that she and Daniel have hosted several events since Charleston Beer Week first began, but that their most successful events have consistently been the Folly Craft Beer Dinner at Chico Feo, which they have done three times previously.

“We love Hank’s food and his culinary vision, says Becca referring to Chico Feo owner/chef Hank Weed, who adeptly mixes Caribbean and Asian flavors in his innovative dishes. “So we thought it would be a great fit to pair his flavors and some of our favorite local craft beers.” Look for some Chico Feo favorites to be served, such as their famous Curry Goat, ‘Meat on a Stick’, Cuban Beans & Rice, and an indulgent looking dessert course.

“The fine chocolates and cheeses and strawberries with honey drizzle paired with the Holy City Pluff Mud Porter creates a chocolaty finish and brings it all together for such a nice finish,” says Becca. Each course will be paired with beers from breweries such as Freehouse, Holy City, Tradesman, and Coast. The beers have been carefully selected to highlight each dish of Chico Feo’s island food in the most tasty way possible. Good luck picking your favorite.

“For a beer dinner, it’s hard to pick a favorite beer because what you’re experiencing is a spectrum of flavors with each course pairing, says Becca. The flavors of the dish complement the flavors of the beer and vice-versa. It’s a mutual agreement. Some pairings can be sweet, some savory, meaty, etc.It’s really about the whole experience.”

Of course, Charleston Beer Week coincides every year with hurricane season. And since Chico Feo is a weather- dependent venue, Becca says not to worry that in true Folly fashion, that there will be a backup plan if it rains (or worse). Two years ago, when Hurricane Irma threatened the coast, she says the dinner had to be rescheduled, but was still a huge success. Tickets are $48 and limited to about 40 attendees. So reserve your spot now.

In addition to the Chico Feo Craft Beer Dinner, there’s at least one other Charleston Beer Week event that’s showing Folly some love, even if it’s off island. The Folks at Holy City Brewing clearly have an affection for their extended Folly family. Not only are two of their flagship beers called Washout Wheat and Pluff Mud Porter, but on Thursday, Sept. 12 they’ll be hosting their annual ‘Drink Beer, Save Turtles’ shindig at their brewery in North Charleston from 2-8 p.m.

The Turtle Survival Alliance will be there with turtles milling around to view, along with plenty of swag for sale to benefit their cause to continue to take care of and save these amazing creatures. Holy City will be serving an IPA called “Turtle Haze” all day in honor of the celebration. It’s time to take a leisurely drive off the beach to support turtle sustainability.

Space for both events will be limited and tickets are available for purchase at www. charlestonbeerweek.com.

Jessica Cobb is a Folly Beach resident with years of culinary experience tucked into her apron pocket. A classically- trained chef and owner of local catering company, Some Like it Hot, she joined the Folly Current as a contributing writer to the Dining section in 2018 as a way to create interest, cravings, and insight on the eclectic Folly dining scene.