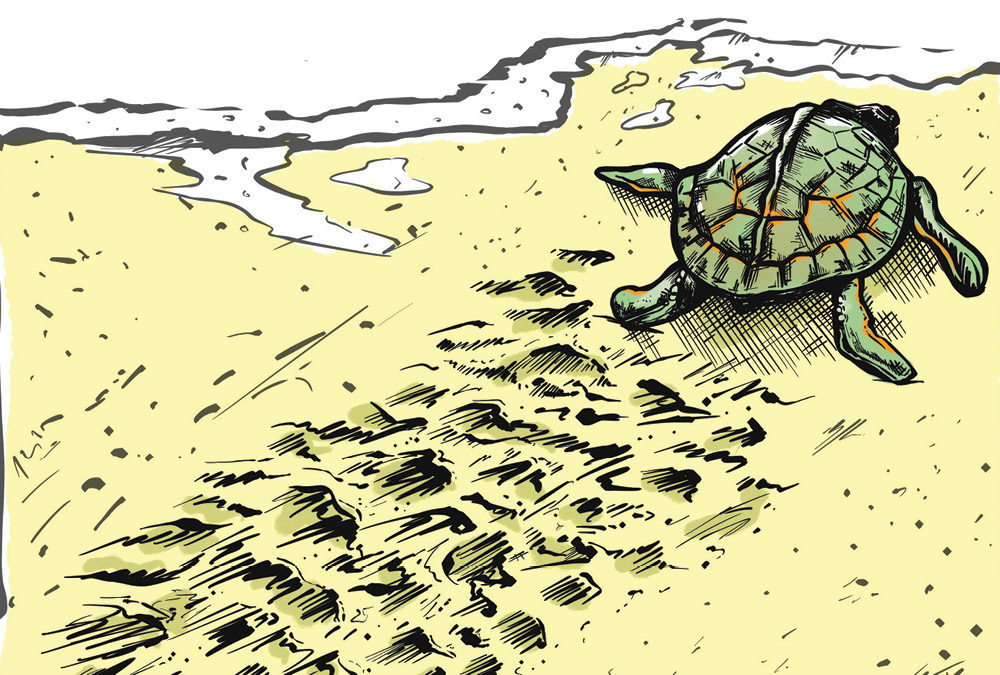 Folly Beach had a record-breaking 145 Loggerhead turtle nests this year, breaking its previous record of 108 nests in 2013, according to the South Carolina Department of Natural Resources (DNR).

But we weren’t the only hot spot for turtle nests. The state of South Carolina had a record 8,800 nests on its beaches this year, a major increase from the last record of 6,300 in 2013. The nesting season runs from May to October.

If you thought you noticed more orange tape cordoning off turtle nests on Folly Beach this year, you were right.

There’s not one reason why there was such an increase this year—biologists say nesting is cyclical and ebbs and flows each year—but research is being done annually to learn more about these Loggerhead sea turtles and their nesting behaviors.

These researchers rely on the community — a dedicated team of volunteers who make sure these numbers are observed and carefully recorded.

Teresa Marshall, a Folly Beach council member who heads up the Folly Beach Turtle Watch Program, says 70 volunteers on Folly Beach walk the entire shore as early as 5 a.m. every day during nesting season, recording nests and turtle tracks from the previous night.

Marshall has been a turtle volunteer for seven years and said at least one volunteer on Folly has been volunteering for 20 years.

Each volunteer is trained and can use probes to locate a nest underground. They put tape around nests, so they won’t be disturbed.

“Sometimes we have to relocate a nest because it was laid below the regular tide-line,” Marshall said.

Volunteers inventory nests after the eggs have hatched to record the number of eggs that didn’t hatch, but their work goes far beyond just recording numbers.

One egg is taken from each nest by the volunteers and sent to DNR for testing in order to learn about the mother turtle and create a larger picture of Loggerhead turtle behaviors along the coast. Nests average about 100 eggs each.

“The turtles on our beaches this year are Loggerheads who hatched 24 to 30 years ago,” said Jeffrey Schwenter, a biologist with the marine turtle conservation program at DNR. “We take one egg from each nest to get DNA on the mother. We can answer a lot of questions about the mother from these eggs — like how many times the mother has laid a nest on Folly, or if she’s a first-time nester.”

Schwenter said turtles often take off several years from nesting in order to build up their energy stores.

“When they do come back, we can tell if they’re coming back to the same beach year after year and even if a mother and grandmother are nesting at the same spot,” Schwenter said. “We build up a database and can look at the relationship between these turtles and the area.”

He said one thing is clear: an increase in new nesting turtles speaks to their survival, and the health of the habitat.

“Loggerheads are listed as threatened under the Endangered Species Act, and this data goes into recovery plans. If we see more new nesters, hopefully we can get them removed from that endangered list,” Schwenter said.

There are many laws in place on Folly Beach aimed at giving the turtles the best chance for survival.

Beachfront homes are prohibited from turning on outdoor lights during the laying season so the turtles leaving the ocean in the middle of the night don’t get confused or disoriented by artificial lights.

“We have had a number of ‘false crawls.’ This happens when a mamma turtle comes out of the water and people are there taking pictures with a flash or have flashlights,” Marshall said. “The turtle may go to another part of the beach or she may just drop the eggs in the ocean in the confusion. We try really hard to educate the public about keeping their distance.”

Beachgoers are also not allowed to dig and leave large holes on the beach. Marshall said future regulations could even put a size limit on shovels used by beachgoers.

“The biggest ordinance the council passed this year concerns a seawall on the East end of the island,” Marshall said. “Even if construction has started, if there is a turtle nest, they have to wait until the nest hatches and we inventory it before construction is allowed to continue with big equipment reverberating on the beach.”

The Folly Beach Council also denied a permit in April 2019 for a production company to film on the beach at night citing concerns that it could impact turtle nesting.

“Folly Beach Public Works and Public Safety is great about supporting us and doing whatever they can,” Marshall said. “Our locals are fabulous and they help protect our mamma turtles.”

A LOVE OF SEA TURTLES

While volunteering for the Folly Beach Turtle Watch Program requires dedication and very early hours, there are once-in-a-lifetime moments.

“The best thing that happened to me this year was when I was walking to the lighthouse and I saw tracks. At the end of the tracks, I had found the mama,” Marshall said. “I caught her at the beginning of her making her nest and laying her eggs. I got to see her from beginning to end, and then saw her leave the beach,” she said. “It was just an amazing thing to see.”

The Folly Beach Turtle Watch Program educates the public about these Loggerhead turtles, often posting the date and location for turtle nest inventories, where volunteers dig up what remains of a nest to mark the number of eggs that didn’t hatch. In the process, they often help hatchlings make their way to the ocean.

“It’s such a passion for all of us—we truly do this because we love the turtles,” Marshall said.

To learn more about the Folly Beach Turtle Watch Program, or to learn how to become a volunteer, email follyturtles@gmail.com or check out the group’s Facebook page.