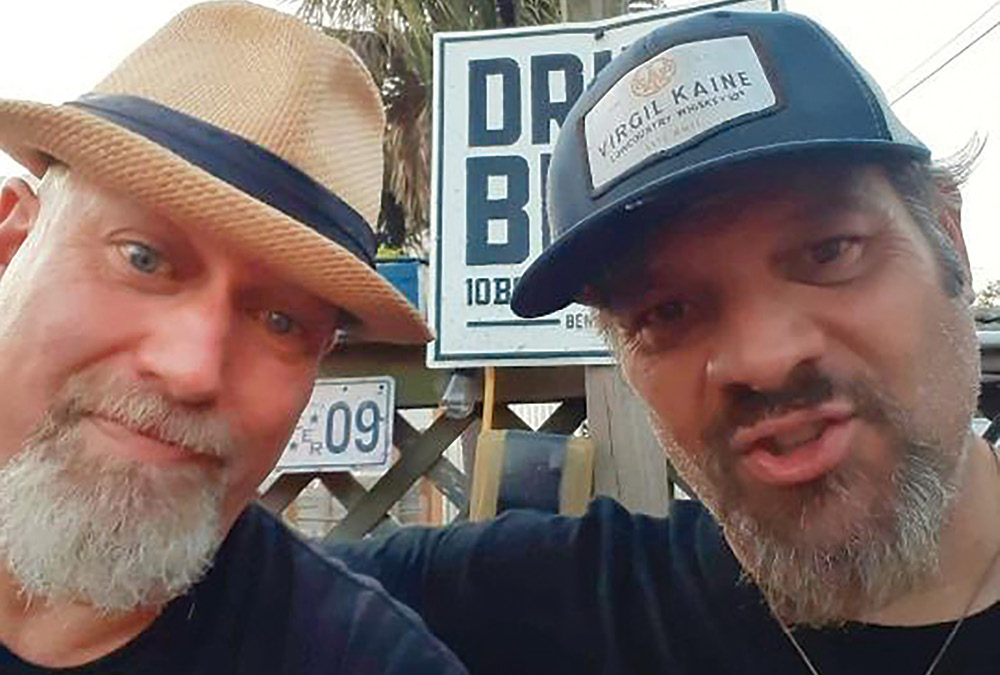 Singer-songwriter George Fox of Big Stoner Creek is stoked to be playing every Sunday in November at Planet Follywood. He will be joined by longtime friend and bandmate Jamie Crisp, who in addition to playing with Fox in Big Stoner Creek, also plays with the local band Ashes of Old Ways. “Jamie and I have been making music together for over 30 years,” says Fox.

The two will play under the name Crispy Fox, with Fox on acoustic guitar and Crisp on standup bass. The two buddies, who are both originally from Kentucky, met at  the University of South Carolina, where they began jamming together. While in Columbia, Crisp and Fox both played with the band Psycho Toy, who opened up for Hootie & The Blowfish back in the day. They traveled around the country for seven years playing music with Psycho Toy. Crispy Fox will also welcome other fellow musicians to the stage for their weekly  Follywood residency this month.

While studying at USC, Fox also met local musician Danielle Howle, who first encouraged him to write his own music. Howle now hosts The Holy City Confessionals, a forum for local aspiring singers and songwriters at HomeTeam BBQ in West Ashley and regularly plays at The Washout on Folly Beach.

“I was a freshman at USC and she was still in high school when I met her and I was totally enthralled with her. She cheer-leaded me into writing my first song … She told me to write it for myself and to not care what anyone thinks,” recalls Fox. “I compare everything I write to her music and I haven’t come anywhere close yet.”

In high school, he would take songs that were written and would rewrite them to be funny. Now, Fox prefers an organic approach to songwriting in which he creates lyrics and melodies to present to Big Stoner Creek band mates Crisp and Jessie Prichard, and the three will often arrange the song together.

“When they bring their voice and their sound it becomes something completely different,” says Fox, who is currently in the planning stages of recording a new album with Big Stoner Creek. The band has been joined onstage by musicians David Vaughn of The Travelin’ Kine and Dallas Baker & Friends, Mark Davis from The Travelin’ Kine and Bob Culver from The Hungry Monks.

“George is very humble and patient with his music,” says local visual artist Shellie Crisp, who is a longtime friend and wife of Jamie Crisp.

According to Fox, he enjoys jamming with his son Jeremiah, who plays drums and has even sat in with Big Stoner Creek at Surf Bar. “I put music to the side to be a responsible dad. Now I’m finding my way on this musical path,” says Fox, who moved from Franklin, N.C. back to Charleston two years ago.

Fox and Crisp traveled up and down the East Coast and out to Colorado with their band Big Stoner Creek from ‘91 to ‘97. They reminisce about traveling in style in a Ford F-350 with a mobile home box on the back named Jethrine, the little sister of Jethro Bodine from The Beverly Hillbillies. The two were joined by the late Roberto “Hawk” Morffi, a multi-instrumentalist with Big Stoner Creek. Fifteen years ago, Morffi was tragically killed when he was hit by a car while riding his bike home from work on Folly Road.

Both Fox and Crisp feel that Morffi’s spirit remains in their music and inspires them to this day. “There wouldn’t have been any Big Stoner Creek without Hawke,” Fox confesses. Morffi is also honored in the famous mural outside Planet Follywood.

Fox and Crisp have seen their share of close calls on the road — including band fights, Prichard being hit by a stray bullet from a .22 while playing a gig downtown at The Radio Room. Fox says he even tried to pick it out with a pocket knife. Then there was the time that Crisp jumped out of a moving van and broke his tail bone. Despite the bumps in the road, the members of Big Stoner Creek have stuck together.

On Friday, Nov. 22, George and Jamie will take the stage at Chico Feo with their other band, The Edge of Americans. They will perform alongside friend and drummer Cree Moore from Big Stoner Creek and Ashes of Old Ways, Matt Hamrick from Hundred Hands Down on guitar, and Edwin Porter from Torture Town on keys.