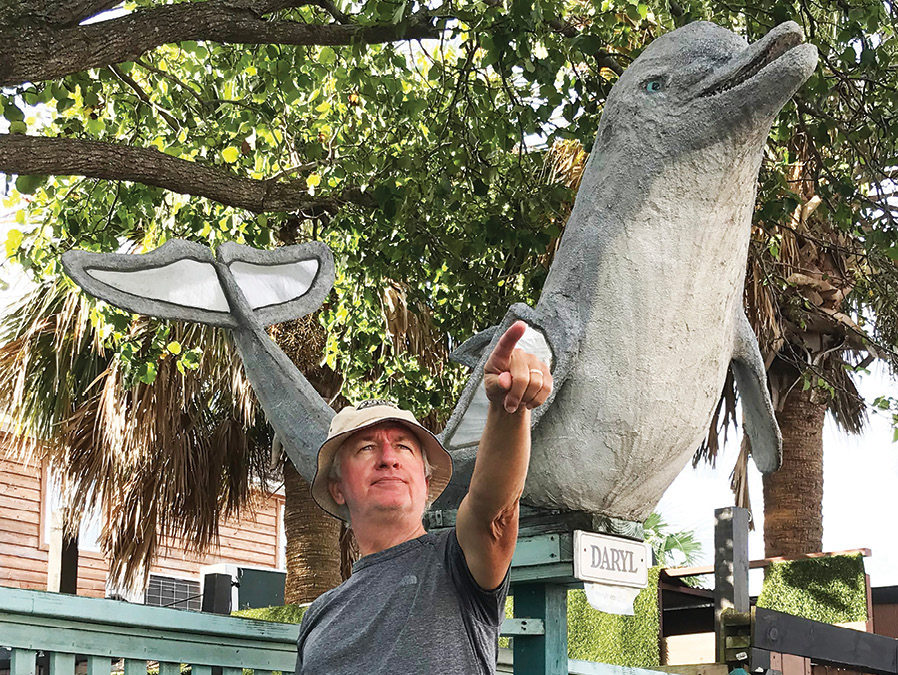 Daryl (the dolphin) sits on a 4×4 post at 103 E. Cooper, staring north. Local artist Jane Word released Daryl from the middle of a huge Styrofoam block. Then she made Daryl strong and weather-proof with steel mesh and concrete.

Much like 3rd graders on the playground, dolphin pods tend to segregate by gender. Female dolphins often work and travel together in pods larger than male dolphins do. If calves or young dolphins swim within a pod, it’s likely females. If two or three rake-marked adults are seen swimming together, it’s likely males. (tooth-scrape scars from other dolphins)

Girl dolphins do the family work. The female pod (made up of mothers, aunts, sisters, and close female associates) teach the babies how to breath, how to catch food, how to make the bed, etc.

For example, once I watched a female dolphin (apparently) teaching a calf how to strand feed. While the calf swam close by, Mom dolphin charged the bank repeatedly in dry runs (no fish present) to demonstrate the technique.

Lone males (or maybe a pair) sometimes orbit 50 yards or so outside the female pods. The girls don’t seem to have much time or patience for the guys.

Full-grown boy dolphins hang out with other guys. They fish together, watch football together, smoke cigars together, etc. In their mind, they’ve got better things to do than raise kids. The girl dolphins seem just fine with the boys keeping to themselves.

For years I observed one particular dolphin I named “Saw Fin” for their distinct saw-shaped dorsal fin. I figured Saw Fin was male because they always swam solo. Then one day, Saw Fin showed up with a calf of her own, but still didn’t attached herself to any female support pod like most mom dolphins do. She broke the gender role model I’d come to adopt. Saw fin was an outlier.

Anton DuMars is a longtime Folly resident and coastal geologist. Though they probably already have names of their own, Anton has assigned names to several local dolphins. Contact Anton at sailspartina@gmail.com or visit sailspartina.com.