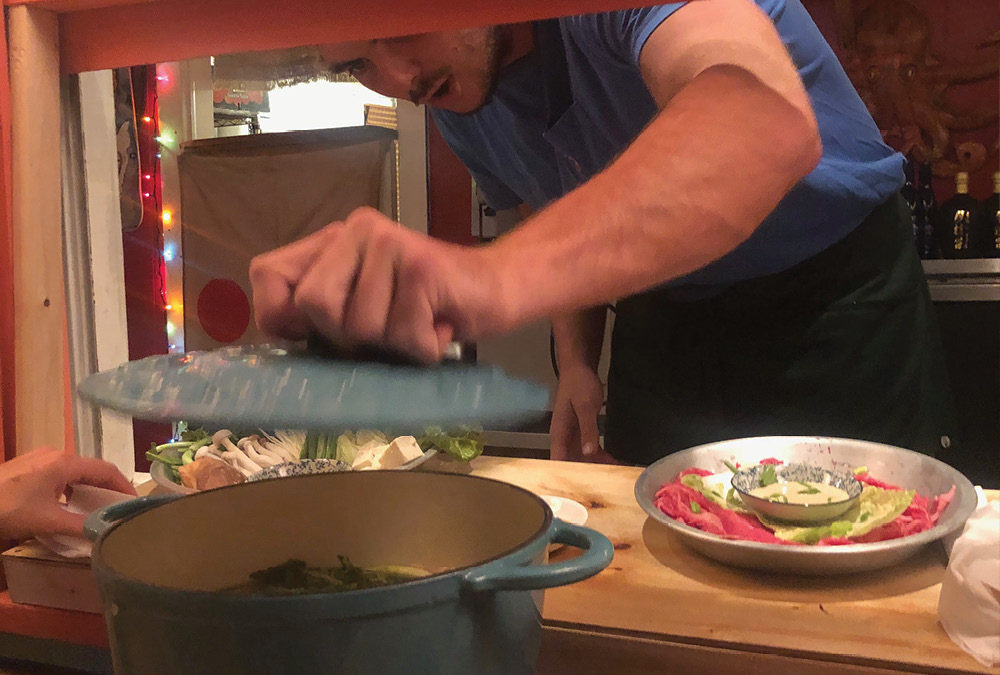 With the nights getting cooler, you’re lucky if you get a seat near one of the heaters out back at Chico Feo. But this winter, you will have something else to cozy up to at Folly Beach’s exclusively outdoor bar and restaurant. While the bar, stage, and picnic tables are centralized around the backside of the building, patrons should take a stroll to the front of Chico Feo for a whole different experience.

“Every winter we try and do something different up there and try to stay relevant during the colder season,” says owner Hank Weed. This year, he’s experimenting with Shabu-shabu, a Japanese hotpot dish where you cook vegetables and thinly sliced pieces of meat in hot broth right at your table, or in this case your bar seat at one of the three windows in the front where you and your dining partner can order. You’re given your own personal burner and a giant pot of really hot broth, which starts out as a simple dashi base but gets more complex throughout the meal as you add ingredients and cook with it.

You could say it’s kind of a Japanese fondue. It’s something that’s fun to do as a couple or small group because it’s a very shared process. Weed says when he visited Vietnam he saw something similar, people gathered around hot pots adding their own ingredients.  It inspired him to look into this style of eating more and learned about Japanese Shabu-shabu. “It’s very communal, very warming, very conversational. It’s great for date night,” says Weed.

The word literally means “swish-swish” and is sort of onomatopoeia for the noise it makes when you swish pieces of raw, paper-thin rib-eye steak in the hot broth. It cooks fast and the broth continues to gain more flavor as you add provided vegetables and aromatics, like green onions, chrysanthemum leaves, cabbage, and various mushrooms. You then dip it in a variety of sauces provided, including a sesame sauce, a ponzu sauce, and a spicy sambal chili paste and eat it with steamed white rice.

At the end of the meal, the broth is now full of flavor and you are given Asian-style alkaline noodles, which are perfectly-made in house at Chico Feo. The noodles take a few minutes to cook and then you have something that resembles Ramen.

Weed says he might switch up the ingredients from time-to-time, maybe adding a seafood element or other proteins. Shabu-shabu is available only Thursday through Sunday evenings on the East Ashley Avenue side of Chico Feo. In addition to the meal itself, Chico Feo is also offering Japanese beers and a handful of sakes.