Bringing The Folly Boat Back 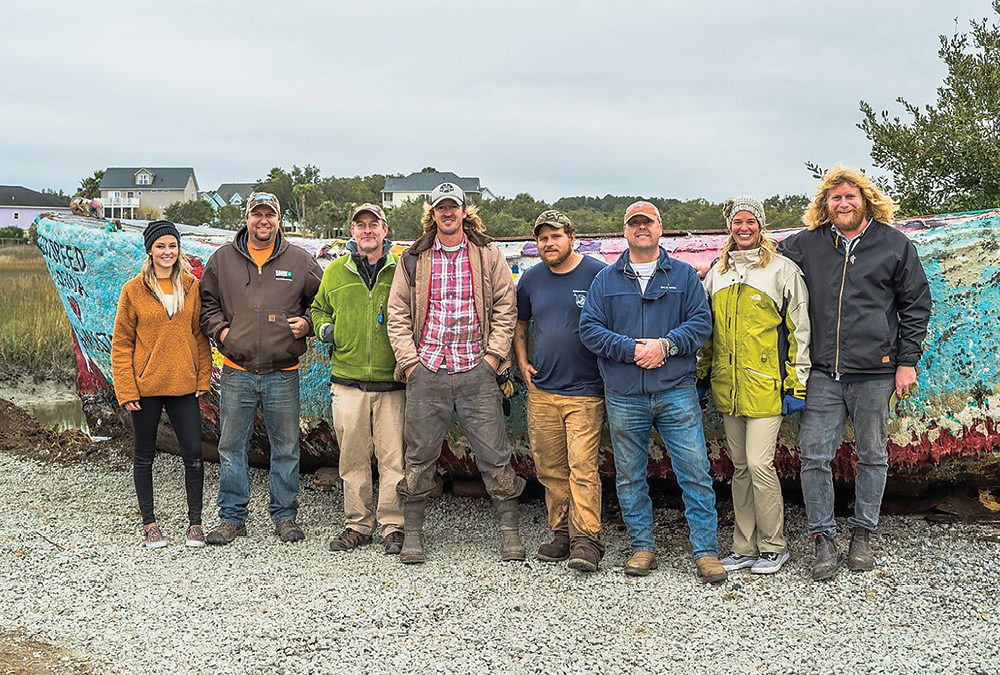 After 2 years, Beloved local landmark finds a new home at The Barrel

After two years—and lots of community effort and coordination—the Folly Boat is back.

For the unaccustomed, the Folly Beach boat is a 36-foot-long vessel that settled along the side of Folly Road following Hurricane Hugo in 1989 and turned into a canvas for individual expression of messages and art.

With no one claiming it or moving it, the boat was painted almost weekly to announce milestones and birthdays.

For nearly 30 years, drivers on the way to Folly Beach would take note about what the nautical billboard proclaimed that day: “Happy Birthday, Mom,” “We Miss You, Dad”…even “Will You Marry me?’

Tropical Storm Irma’s winds and waters lifted the boat off its perch on the shoulder of the road and took it back into the marsh, where it floated away and came to a stop at a private boat dock.

For two years, community groups worked to salvage the boat and return it back to its place along the side of Folly Road.

“It was such a cool canvas and very special. I’ve painted two memorials for friends on it,” said Eric Draper, who started the non-profit Save the Boat and raised around $3,000 through a GoFundMe.

The group had been scouting out new locations for the boat, but regulations concerning the public right-of-way and liability meant the old location was no longer an option.

“We had a location for it, but then plans changed in December, and we threw up a Hail Mary,” Draper said. “We asked, ‘Does anyone have any ideas?’ And Chad Reynolds picked up the ball and ran with it. He was the difference.”

Reynolds, the owner of The Barrel bar on James Island, offered to give the boat a permanent home.

“I care about the boat and I know how much everyone else cares about it, and I wanted to do this for the community,” he said.

He welcomed the boat at The Barrel property at the corner of Folly Road and Battery Island Drive—still accessible from Folly Road, but with no regulations or permits needed.

“It’s not on the right-of-way, it’s just like parking my personal boat there on a trailer,” Reynolds said.

It took quite a bit of help to get the large, heavy boat back on shore, including reorienting the way The Barrel’s existing fence opened to make room for the vessel.

Reynolds said the operation wouldn’t have been possible without the help of Limehouse & Sons donating crane equipment and workers who donated their time for this day-long effort.

The boat was surveyed in the marsh, still painted with ‘Godspeed Florida’ on it, the last message it displayed before Tropical Storm Irma.

Crews needed to use a 100-ton crane to attach hooks to the bow and lift the 20,000 pound boat into the air. They placed straps around the bottom and moved it to a 40-foot flatbed to transport it.

“They strapped it down real tight to the flatbed, and Folly Beach Public Safety officer Andrew Gilreath set me up with a police escort and we slowly drove the wide-load flatbed to The Barrel,” Reynolds said.

Traffic was briefly stopped on Folly Road for the effort, but drivers didn’t seem to mind.

“A lady here was crying, shedding tears about the boat being back,” Reynolds said. “That made me feel really good. So many people came up hugging me. When I went out to Folly Beach, people were buying me beers,” Reynolds said. “USA Today even had a blurb on it.”

Now, the official city illuminated sign on the way to Folly proclaims, “Welcome back Folly Boat!”

The first paint job the boat got at its new location stated, “Merry Christmas Folly…I’m back!”

It was truly a team effort that brought the 36-foot-long community art piece back along the side of Folly Road, ready to be painted and photographed just as it was before.

Everyone is welcome to show up with paint cans and rollers to paint their own messages and announcements on this historic canvas.

Reynolds said he is determined to keep the boat exactly as it was, with a few enhancements.

Several anchor nails were driven into the ground to keep the boat secure. A trash can will be added so people who paint the boat can dispose of their brushes and paint cans. A welder may come and repair holes.

Above all, Reynolds hopes the boat will return to its beloved purpose, to share in milestone moments and happy occasions with all who head to the beach.

“I hope people can keep it classy with birthdays, engagements and births; there’s no need to get weird,” Reynolds said.

In true Folly fashion, an event celebrating the return of the Folly Boat is in the works. Reynolds said there will likely be an oyster roast, music and a large screening of a documentary of the boat’s journey back to the road by photographer and friend Dana Norton, who filmed it all.

“We wanted to document it for everybody, so the community can have it forever,” Reynolds said.

“I am thankful to the man who’s dock the boat landed on; he was patient and worked with us to find a new home,” Draper added.