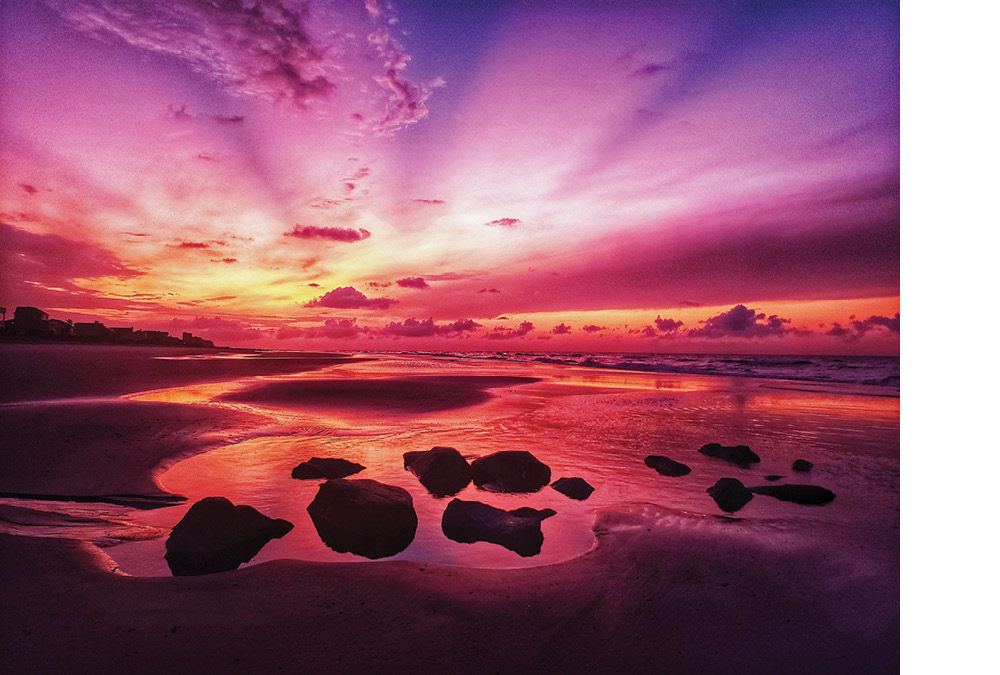 The Folly Beach Civic Club calendar is an annual celebration of all things Folly Beach. Professional and amateur photographers alike showcase the beauty of our island in 12 striking photos that feature sunsets, sunrises, the majestic Morris Island lighthouse, the Folly Pier, the beaches, the marshes, and river.

The Folly Current has teamed up with the nation’s oldest continuously operating civic club to showcase even more of the natural beauty of Folly Beach. Starting with this issue, the Folly Beach Civic Club will submit a “Photo of the Month” to be printed in The Folly Current. This doesn’t necessarily mean it will be one that will be featured in the 2021 calendar, but it will be added to the pool of photos that are being considered for the 12 monthly slots.

Kicking off the Photo of the Month feature is a stunning photo entitled Washout Rays by local photographer Amanda Vargo.

The Civic Club calendar and Photo of the Month are something that are close to second-year Civic Club president Katherine Houghton’s heart. An educator with a background in fine arts and specifically photography, Houghton is currently on a trip traveling with her camera through Honduras, Belize, and Mexico. “Taking photos rejuvenates me,” says Houghton. Originally from New England, she has settled on Folly and is using her experiences to make the Civic Club and the island in general a better place. “I want to use my skill set to benefit Folly,” says Houghton. “I feel like things have come full-circle for me.”

Calendar coordinator Kathy Miller says that the photographer will also be mentioned in the Civic Club’s monthly newsletter The Sandspur as well as highlighted on the club’s social media pages.

Photographers can submit up to three photos per month to be considered for the calendar and the Photo of the Month. All photos must be high resolution and landscapes are preferred over portraits. They can be sent to Kathy Miller at kathymiller74@gmail.com.