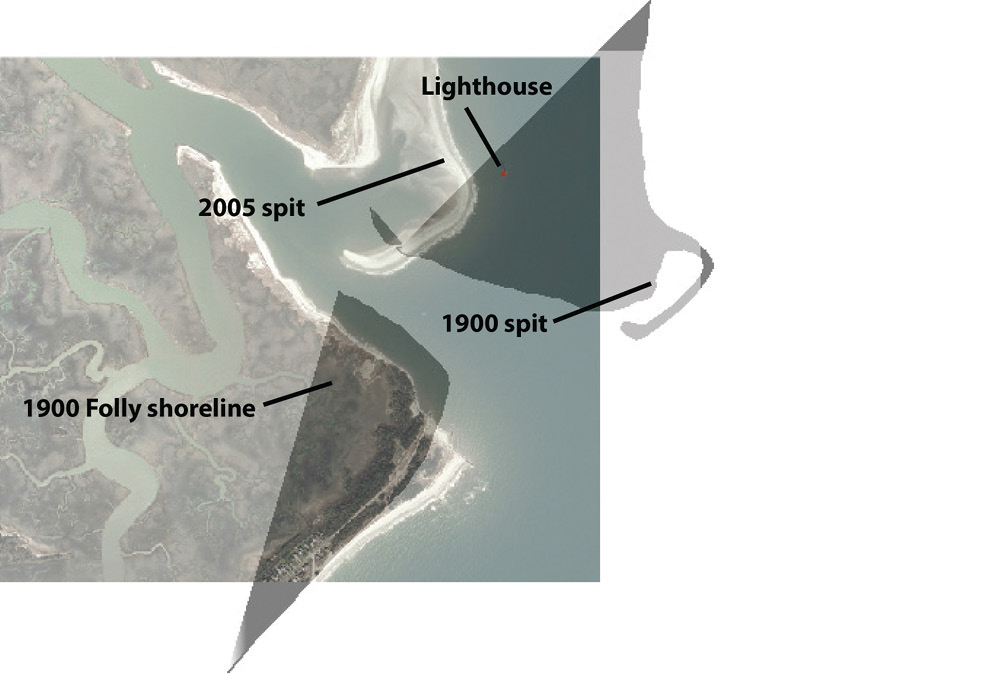 In late summer of 2011, I idled into the cove behind the southwestern Morris Island spit. Right away, something wasn’t right. I’d just spent the summer swimming, crabbing, and casting for bait in this cove and knew it well.

Nearly every day, I negotiated the narrow channel, avoiding the shoals on the back side of the sandbar. Now, at dead high tide, my skeg bumped the bottom where the day before I had plenty of water.

As I nosed the bow onto the shoreward side of the spit, my passengers jumped out to explore the island. Just down the beach, a lone fisherman sat in a lawn chair, watching his surf rod. Before we’d landed, I’d seen him release a big red drum back into the September surf.

I set the anchor, noting a continuous overwash from the new-moon spring tide surf. Over-washing waves developed a channel, dividing the spit in two. A steady sand slurry, directed through the channel, flowed hell-bent on filling the cove.

An old chart, dated 1900, features a prominent spit on the southwestern end of Morris Island. This spit existed 1,600 yards seaward of its 21st century progeny. The past and present spit show uncanny resemblance in both size and orientation.

My guests returned and boarded the boat through ankle-deep water. I started the motor, stowed the anchor, and began my retreat from what was the day before a predictable exit. Bumping and lurching my way out of the cove at dead high tide had me wearing a nervous smile, the bottom now foreign like the dark side of the moon.

The next day, I re-visited the spot to finding five acres of sand occupying the former cove.

A coastline, like one’s life, experiences months, even years, of relative stability. Then some random event takes the whole mess, shakes it up, and casts it back out, rendering our world unrecognizable. But nature finds an average.

Persistent daily forces once again take charge, sculpting life into a semblance of its previous existence.