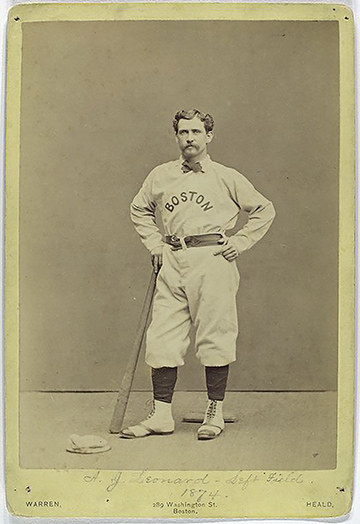 Andrew “Andy” Jackson Leonard, one of the first-ever professional baseball players in the country lies in an unmarked grave in a grassy field in Boston. But 150 years since his career began, Leonard’s 82-year-old grandson is about to change all of that.

Charles McCarty of West Cooper Avenue on Folly Beach has been holding on to some important and historical baseball artifacts for decades. The Boston native and former Folly City Councilman recently decided to sell these rare documents and is planning to use a chunk of the money raised at auction last month to pay for a monument for Leonard, whom he has never met but has learned a lot about over the years.

Referring to him as one of the “original boys  of summer,” McCarty’s research on his grandfather led him to some folks who helped him understand just what significant documents were in his possession. Since he was a kid growing up in Boston, McCarty has had his grandfather’s signed professional baseball contracts, which are among the oldest known in existence and believe to be the oldest that are not in a museum or the Major League Baseball Hall of Fame.

Born in County Cavan, Ireland in 1846 during the Potato Famin, Leonard moved to the United States with his mother when he was just 2 years old. His family settled in Newark, New Jersey, and it didn’t take Leonard long to start turning heads as a baseball player.

Leonard became one of the first baseball players to be paid to play the game when he joined up with the Cincinnati Red Stockings in 1869, baseball’s first professional team.

Two years later in 1871, after the Red Stockings disbanded, Leonard signed a contract with the Washington Olympics. It’s that contract, who was among the documents that McCarty had auctioned off on Feb, 20, that is the most historically significant, according to Chris Ivy, director of sports at Dallas-based Heritage Auctions, which handled the sale. For compensation, Acting United States Treasury Secretary William Richardson appointed Leonard to a position as an Assistant Messenger of the Second Auditor, a position requiring little or no work, that provided Leonard with money and a title so he could be free to play pro baseball.

Because this contract appoints Leonard to an every day position within the U.S. government, the contract proves what many believed to be true but did not have previous evidence — that the U.S. government was helping fund professional baseball, something that would have been frowned upon.

This U.S. Treasury contract was the crown jewel of the grouping of nine documents related to the earliest days of professional baseball. They were all being auctioned off last month at Heritage’s Platinum Night Auction at the Fletcher-Sinclair Mansion in New York City. Othere items included a personal diary Leonard kept while playing on a Goodwill tour” of Britian  in 1874.

Dubbed the Andy Leonard Collection, the nine documents were appraised at nearly $100,000. Because of the process of collecting the money and commissions to the auction house, as of press time McCarty was unsure of exactly how much the memorabilia actually yielded, but said it was not as high as it was appraised. However, McCarty did say enough was raised to cross a couple things off his list that he hoped the money would allow.

Number one ion the list is to purchase the monument marking his grandfather’s grave. Heritage Auctions also agreed to donate a portion of their commission to help the cause. Second, McCarty plans on making a sizable donation to the Irish Baseball League, who actually named its most valuable player award the Andy Leonard League Most Valuable Player Award.

At 82-years old, McCarty is hoping to now find some time to write a book on his grandfather, something he says he has wanted to do since he retired in the ’90s. But after moving to Folly Beach in 1996 he served on the City Planning Commission and then on council as mayor pro tem. Folly Current readers may know McCarty as the contributing writer who has been covering City Hall since The Current returned to print early last year. He says he’s ready to pass the baton and focus on his book, which he has tentatively titled  either “Rooting For Andy” or “Rooting For Pa.”