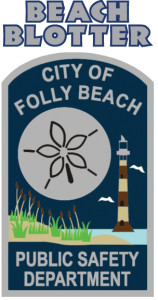 Tuesday, Oct. 3
TAGGED (THEN BAGGED)
Around 1:30 p.m. the Chief of the Folly Beach Public Safety Department called to an officer on patrol and informed him he was watching a man vandalizing the side of a building on Center Street, “tagging” it with a white paint marker. The Chief attempted to track the subject down on foot, while other officers also joined the pursuit. An officer located the 27-year-old subject and detained him. When the Chief arrived, he positively identified the man as the suspect. The man was arrested for vandalism, and a search of his person found three white paint markers. The subject was charged with Damage to Property and given a court date.

Monday, Oct. 9
WILD RIDE ON FOLLY
The R/O was on routine patrol on Tides End Road off of Folly Road in a marked cruiser around 9:45 p.m. when he observed a vehicle driving southbound at a high rate of speed. The officer activated his radar, which indicated the suspect vehicle was moving around 90 mph in a 45 mph zone. The R/O initiated a traffic stop, but the suspect vehicle did not comply. The R/O radioed ahead for backup. The vehicle continued to speed into Folly Beach on Center Street. Officers chased the vehicle onto Arctic Avenue, East Second Street, East Cooper, Erie, Hudson, Huron, and Indian, over Center Street without stopping, and finally leaving the roadway on the curve at Woody Lane and West Indian Avenue. Three males then exited the car and fled on foot. After several hours of searching with police and fire personnel, all three suspects were located and arrested for Resisting Arrest, with other individual charges of Failure to Stop for Blue Lights, Driving Under Suspension, and Possession of Marijuana.  All three were taken to the county jail.

Sunday, Oct. 15
HARD TO STOP A REAL JERK
The R/O was flagged down to a Center Street bar around 7:11 p.m. in reference to a customer being difficult. Upon arrival, the officer interviewed the bartender who said that the 34-year-old subject had walked up and slammed his hand down on the bar mumbling something. The bartender said he was busy and temporarily ignored the subject. When he returned to the man, the subject mumbled something again. Seeing the subject was drunk, the bartender told him he would not be served and he should leave. The man held up not one, but two middle fingers and yelled out “f*** you,” and left. As the bartender was explaining all of this to the officer, he pointed the subject out, who was next door outside another bar actively harassing another patron. The R/O approached the subject and asked what was going on, to which the subject replied, “nothing,” and continued to harass the other man. The officer asked for the subject’s ID, to which he responded he didn’t have one, then again went back to harassing the other man. Due to the subject’s intoxicated state and aggressive behavior, the R/O placed him under arrest for Public Intoxication, and took him to jail.

Sunday, Oct. 15
BAD NIGHT FOR EVERYONE
The R/O was dispatched to Center Street around 1:30 a.m. in reference to a Hit-and Run. Upon arrival he found the suspect vehicle in the roadway, with the 44-year-old female driver in the driver’s seat, passed out with the car still running. Two victims were also on the scene and said the suspect had backed into their car hard, then drove off. They had followed the car to Center Street. The R/O opened the suspect’s door and then she woke up and asked what was going on. The officer immediately noticed the suspect had bloodshot eyes and impaired motor function. She also smelled like alcohol. The officer asked the woman to step out of the car to look at her back bumper. The woman complied, and nearly fell down getting out of the car. In the process, her boob fell out, and the officer had to ask her to cover up. During the discussion, the suspect asked several times, “what do you need again?” The woman became aggressive with the officer, and refused to follow instructions on field sobriety tests. Then she resisted arrest and had to be manhandled into the patrol car. She refused to provide a Breathalyzer test sample, and was arrested for Driving While Intoxicated, Leaving the Scene of an Accident, and Resisting Arrest. While being transported to the county jail, the suspect made several declarations, including that the R/O was violating her, that she was going to tell her lawyer and her sister who is in the media business, and that the R/O was a “wannabe white boy.” The officer notes the suspect made “so many derogatory statements during the arrest, the breath test and all the transports, I couldn’t write them all down, but have it recorded on body camera.”

Tuesday, Oct. 17
PARTIED OUT ON FOLLY
The R/O was dispatched to the 900 block of East Arctic Avenue around 6:30 a.m. in reference to a Trespasser. The officer arrived to find a 34-year-old woman asleep on the porch of the residence. After several minutes, the officer was able to awaken the woman. The subject was unable to provide any information to the R/O except her first name. She didn’t have any idea where she was or where she was supposed to be, and she was barefooted. A little while later, she was able to come up with a West Hudson address. The officer drove the subject to the address where he was met by the subject’s significant other, who said she had left earlier that evening and not returned. The subject was issued a citation for Public Intoxication and released.

Sunday, Oct. 22
DON’T DAWDLE IN THE PEDESTRIAN CROSSING
The R/O was in his patrol car on Center Street when he observed a man stop in the middle of a Center Street pedestrian cross walk to tie his shoe. The officer yelled at the man to get out of the road, to which he replied, “f*** off.” Several officers were nearby, and stopped the subject to have a word with him. During the interview, the subject’s brother and sister walked up. As the 19-year-old subject was acting violent, he was handcuffed for questioning. At this time, the subject started apologizing and said, “please don’t arrest me, I’m going into the Marines in two days.” After conferring with the sister, brother, and all officers involved, it as decided to issue the subject a citation for Disorderly Conduct and release him into the custody of his sister.