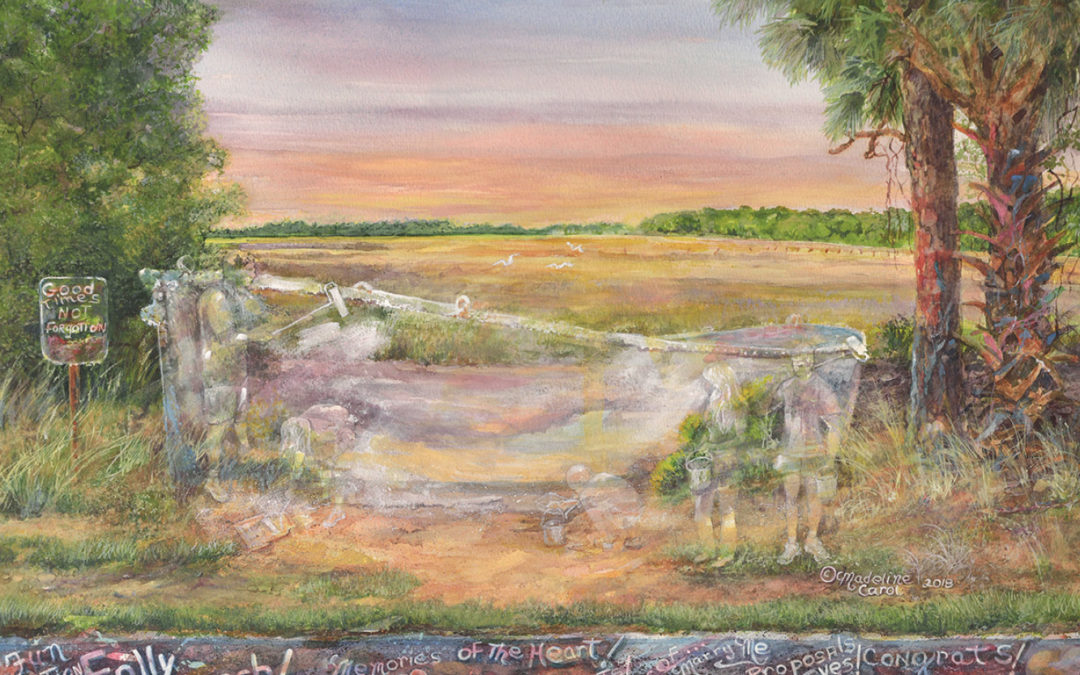 Local painter Madeline Carol brings Folly’s past back to life

Local painter Madeline Carol sets herself apart from other Charleston painters by adding specters into historic Charleston scenes. Growing up with an artist mother, Carol was exposed to art at an influential age and her hobby further blossomed into a profound career.

Carol graduated from Hanahan High School but lived throughout the United States and England during her childhood. She once lived in a castle outside of Ipswich, England, where her mother taught art lessons. Carol remembers modeling for her mother’s art classes as a young girl in Wickham Market.

The castle boasted high ceilings, a moat, ballroom, dungeon, and apple orchard. Carol was once crowned a beauty queen in England making her life as close to that of a princess as possible.

Carol considers her mother to be one of her greatest artistic influences, among local artist Freda Hanna and Ray Goodbred, who taught at the Art Institute of New York but later moved to Charleston.

According to Carol, she has been very fortunate to have had the opportunity to take art lessons from Goodbred. “Take lessons from whoever you can and if you take away one nugget of information, that makes it interesting,” says Carol who also studied art at North Greenville Junior College, Charleston Southern University, and The College of Charleston over the years.

“Folly Beach is so dear to my heart,” says Carol who recalls a lot of wonderful memories being a teen in the late ’50s and early ’60s, including shagging on the beach and seeing bands perform on the Folly Pier.

Carol is dear to the heart of Folly Beach indubitably. She has painted scenes of the Morris Island Lighthouse, The Folly Pier, The Atlantic House, and the Folly Boat amongst other popular Charleston landscapes.

Carol will often eerily adds ghost images into her paintings to give her art deeping feeling. She describes her style of painting as “Where the past meets the present” and “Memories of the heart.”

The painting is of two lovers kissing under a streetlight on Legare Street downtown, where a girls school used to be. “A ghost showed up in the wall but I didn’t consciously paint it,” says Carol. “The reason I painted this piece is because love conquers all,” she adds. Interestingly, former S.C. State Senator and College of Charleston President Glenn McConnell posed for the painting with Carol’s sister.

Carol’s painting titled Swept Away features the Folly Boat in its previous location before it was washed away, with a host of ghost painters.

While painting a Christmastime piece titled Holy City Holy Night, an image of waves washing up on The Battery during Hurricane Hugo in 1989, a Nativity Scene appeared in the right hand corner of the painting. The mysterious illusion matches well with the Christmas theme of the painting.

To see Madeline Carol’s online gallery or to order a print, visit www.Carolcarolgallery.com. You can also call (843) 270-6943
for more information.