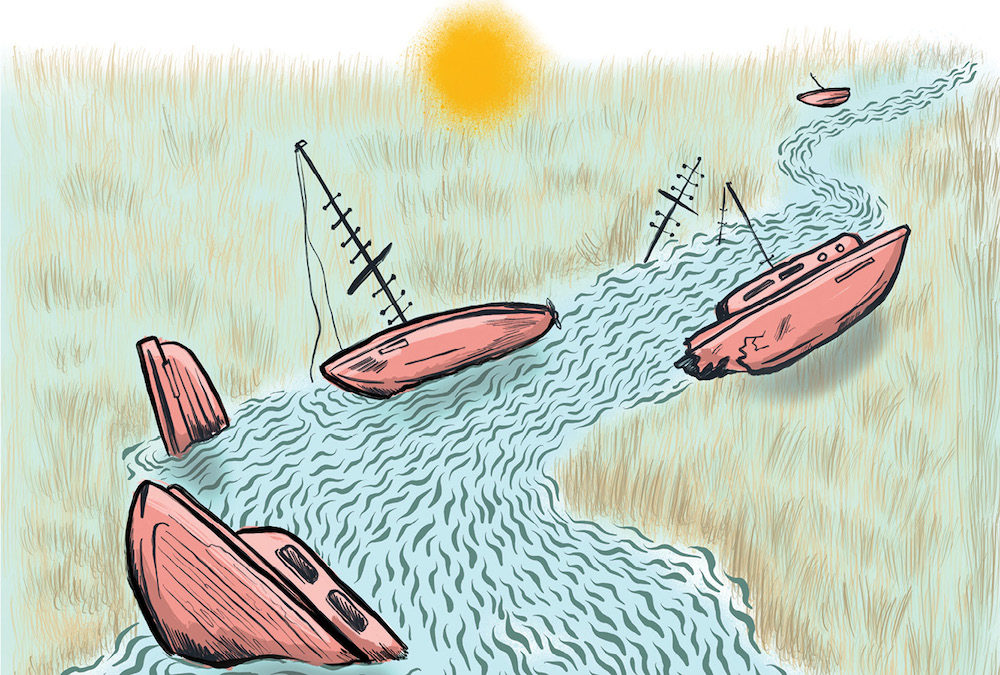 Local, state, and federal agencies working together to remove derelict boats from waterways

We see them out there in the water, lurking and moored. Deadbeat boats whose owners have abandoned them to the winds and the tides.

Most of the time they just sit there, causing little harm other than being just damn ugly. Sometimes, though, the submerged hulks scrape the bottom of a boat or nick a tiller or a prop.

Even worse, sometimes during storms when wind and the water is up, they let go of their moorings and drift, smashing into innocent docks and other boats, causing costly damage.

Well, Police Chief Andrew Gilreath and everyone down at City Hall are doing something about it. The last time the city marshalled a dead-boat round-up was 11 years ago in 2008.

The city had reached out to federal and state agencies for money to help remove the dead boats littering our waterways and marshes.

And recently, the federal National Oceanic and Atmospheric Administration has sent along close to $65,000 in grant money through the state’s Ocean and Coastal Management agency to get rid of the eyesores.

The city will likely have to match the grant, as more abandoned vessels are identified.

City Administrator Spencer Wetmore says the city is “hoping to work with state Department of Natural Resources, the U.S. Coast Guard, and OCRM to put new regulations into place to prevent further problematic mooring, particularly near the boat landing.”

Chief Gilreath says many of the boats also pose an environmental threat.

“The boats will have gas in their tanks; additionally, the fiberglass, oil and batteries over time present a concern when it comes to them leaking, especially when the vessel is underwater,” he says.

Gilreath and his officers, who already have access to the waterways via boat, have already begun the process of designated which boats that meet criteria for removal. They have been mapping their locations over the past few years to see how storms affect their location.

Gilreath says there is a concentration of discarded sailboats near the bridge, but not on the other side as they couldn’t have passed under it. He also says that many of the boats are squirrelled away in creeks and rivers, and though maybe not as visible, easily as loathsome.

Apparently, vessels “anchored” by a five-pound bucket of concrete become a full-size sail when storm winds hit them and drive them into troubled waters

The city will soon begin taking bids from marine removal companies to come in and remove the dead boats. Those that have sunk to the bottom may be strapped and pulled up via wenches or with the aid of airbags, according to the police chief.

Once accessible, the boats will be picked over for mitigation of gas, batteries, and the like before being crane-lifted onto a barge, and then eventually crushed and stored at the county landfill, he says.

There are no plans to use any of the boat carcasses as “artificial reefs,” as the vessels pose too much of an environmental threat.

Gilreath warns that while it is completely legal to take or scavenge dead boats, there are serious safety concerns in boarding the things, and that whatever valuables may have already been taken.