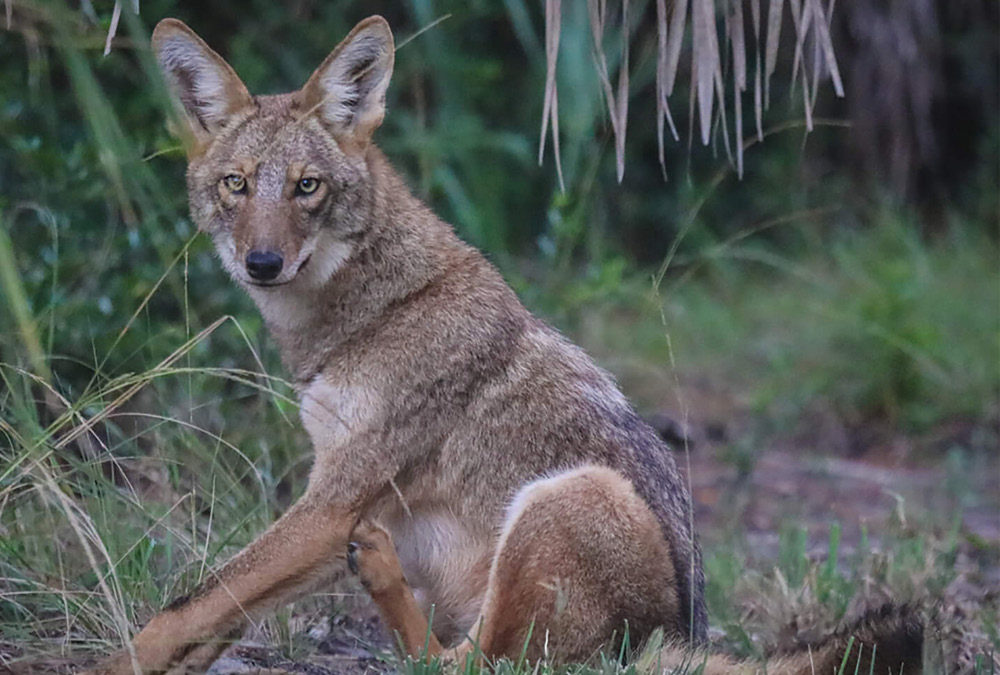 Call of the Wild

Driving north on Folly road past Battery Island Drive one morning, I saw a lanky dog-like animal cross in front of me toward an oncoming car. With incredible agility, the animal reversed course to avoid a collision. It paused by the side of the road as if to check traffic, then continued across into the woods near James Prioleau Road. I’d just seen my first lowcountry coyote.

Surrounded by salt marshes and tidal creeks, Folly Beach is an Island. Islands tend to create a geographic migration barrier to those species unable to negotiate the marsh or creeks. Despite these geographic barriers, coyotes have found their way to local barrier islands (Sullivan’s, IOP, Kiawah, Johns, James, Wadmalaw). Coyotes swim and probably use causeways and bridges.

A well-documented Sullivan’s Island coyote concern includes photo and video proof of cohabitation. The town has written a Coyote Management Plan and created a coyote-siting map of the island. They’ve been spotted in all parts of Sullivan’s Island.

Coyotes, an invasive species, inhabit the lowcountry’s terrestrial top predator niche. They share the top spot with bobcats and foxes, and the occasional black bear, all native species. These predators prey on other smaller mammals, lizards, and sometimes insects. They’ve also been known to scavenge.

Some wonder if a healthy bobcat population hinders coyote territorial establishment. Do they share or compete for territory? Coyotes arrived on Kiawah and Seabrook in early 2011, joining a healthy bobcat population. So far, both species apparently still thrive on the islands together. Harry Mims (Folly Beach’s animal control officer), recently took a report of 3 coyote kit seen on the east side near the 4th or 5th block marsh. Though he looked in the area for an hour or so, he never found the 3 young coyotes. Another (unconfirmed) adult coyote sighting occurred near 4th block East Huron Avenue. Soon Folly may need a Coyote Management Plan of its own.

Anton DuMars, a coastal geologist and longtime Folly resident, has not yet seen a coyote on Folly Beach. You can reach Anton at sailspartina@gmail.com.