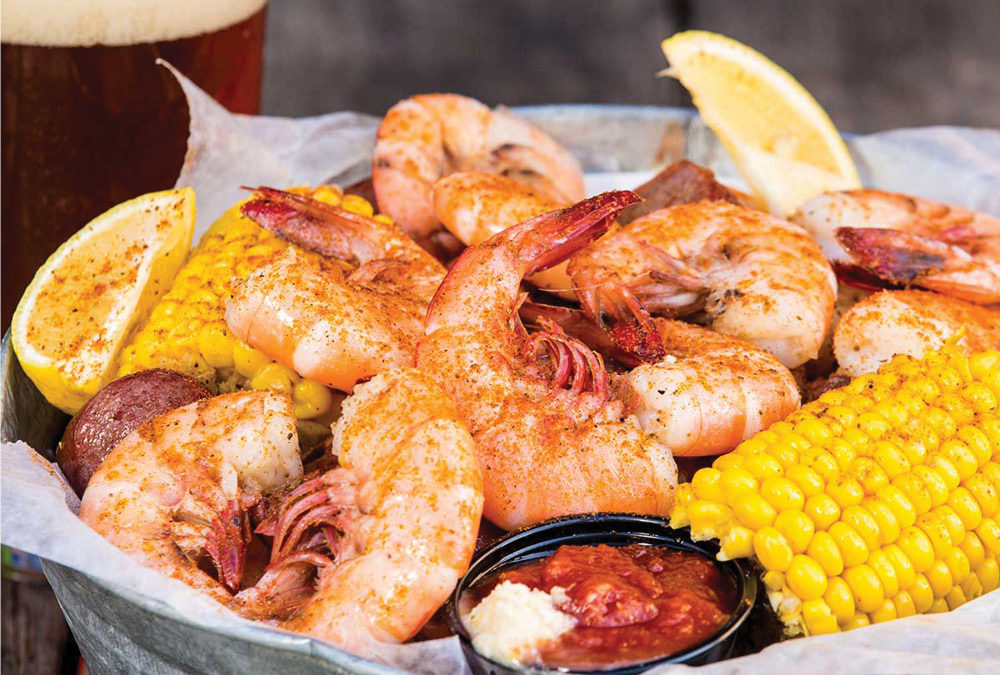 More common than ever to find Local shrimp on local menues

One of the most memorable scenes from the beloved movie, Forrest Gump, is where Benjamin Buford “Bubba” Blue is describing his love for the diverse shrimping business in Alabama to Forrest.

Come to the Lowcountry and you’ll find the same type of love here, and it’ll most likely be in the form of shrimp and grits, Frogmore stew, or simply peel & eat style. According to the South Carolina Department of Natural Resources (SCDNR), the local shrimp season of 2019 opened back in May with high expectations for a plentiful harvest, and it hasn’t disappointed. 2018 had an unusually longer cold period than usual that basically wiped out the shrimp season until mid-June, which resulted in a huge loss that was felt throughout the shrimping community.

From the harvesting boats and their hard-working crews to purveyors who sell to the restaurants and the chefs that depend on them, many were affected in a negative way. Local shrimp is a hot commodity around Folly to those in the industry, and to take that away for even a few months can make a huge dent in the livelihood of many. The teams who make a career of it rise well before the sun for days on end to go miles out into the sea to cast their nets, catch what they can, sort through by hand, and bring to shore as many as these little delicacies as possible.

The thing is, the taste of shrimp caught locally around Charleston is unlike any other, it’s plump and sweet, and locals can usually tell the difference. It seems that so many people visit Folly Beach and are in search of the much-loved Alaskan crab leg feasts (News Flash: wherever you’re from, you’re likely closer to Alaska than we are). In reality it’s the Carolina shrimp that are truly the stars of our crustacean world. Luckily these days there are more and more restaurants that are going the local route rather than outsourcing to the often more affordable farm-raised options from foreign, unregulated oceans. It is most certainly the consumers responsibility to know just where their seafood is coming from, to support the local community of folks that are out there making sure that the product is coming from healthy waters, and because the fact is that it simply just tastes better!

If you’re looking to continue to support the local shrimp movement, there are many restaurants around Folly Beach that are serving up the sweet little gems. Check out Bowen’s Island and their Frogmore Stew, Locklear’s on Little Oak with their simple Old Bay dusted Peel & Eat, Sushi by Lisa and her Flaming Scorpion roll, Lowlife Bar with their succulent Local Shrimp Roll, Blu’s gilled Carolina Shrimp Avocado Toast, Wiki Wiki’s Southern-Fried Coconut Shrimp, or the Crab Shack’s Lowcountry Shrimp & Grits, just to name a few.

Of course, if you’re like me and prefer to cook up a big batch yourself, then you’ll head straight to Crosby’s Seafood as the boats are docked and grab a couple of pounds straight from the source. I’ve included one of my favorite ways to eat shrimp below, I hope you’ll try it! Grilled, fried, broiled, or sautéed, however you like them just make sure they’re local and you won’t be disappointed.

1. Combine all the ingredients, except the shrimp in a medium bowl. (Reserve 1/3 of the marinade to the side).

2. Add shrimp to mixture and let marinate in the fridge for at least 30 minutes, preferably 2-3 hours.

6. Broil for 3-4 minutes on each side or until shrimp are done and pink.

7. Top with the remaining marinade and serve hot or chill in refrigerator until ready to serve