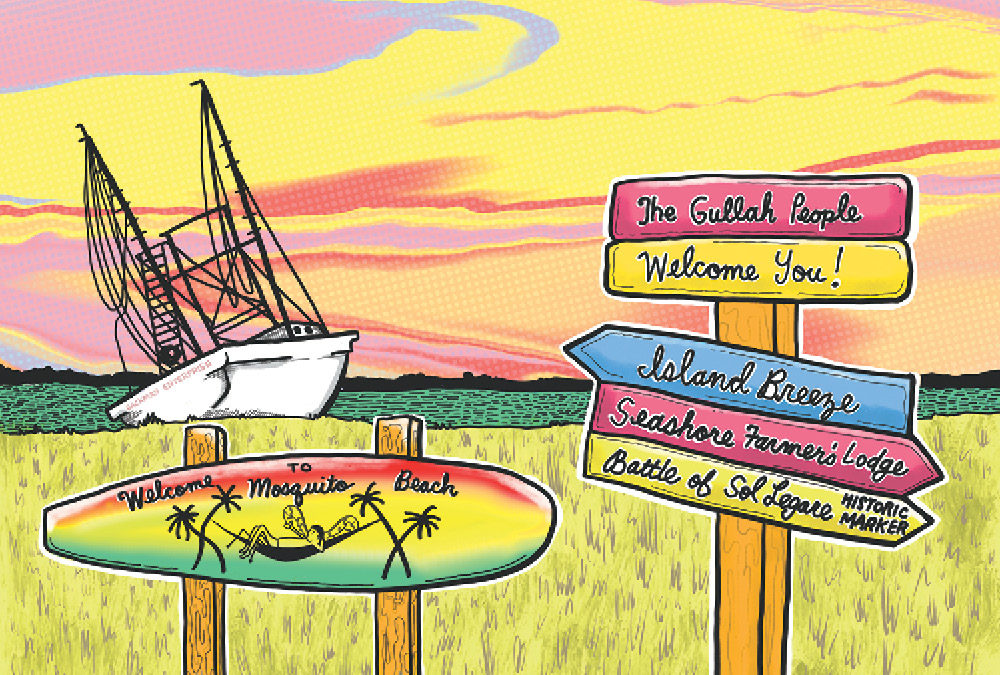 Tucked away from the main road and surrounded by marshes, this isolated and insular African-American community of farmers thrived despite societal discrimination.

In 1915, Sol Legare residents built the Seashore Farmers’ Lodge, which served as a community center, meeting hall, and lifeline for citizens. It was a last resort for the members of the community, even paying families who lacked necessary funeral expenses.

“It was like insurance for the community” said Tony Byrd Jr., a third-generation resident of Sol Legare. “From the stories I’ve heard, no one really ever went hungry or went without during those times; everyone helped take care of each other. Citizens of Sol Legare farmed the sea and the land, and the elders were great carpenters and contractors. The stories of how everyone took care of each other and survived back then is amazing.”

History was also made on the narrow strip of land: During the Civil War, it was the site of the Massachusetts 54th Regiment, the country’s first volunteer African-American U.S. Army regiment, highlighted in the 1989 movie Glory, starring Denzel Washington and Morgan Freeman.

The members of the Massachusetts  54th gave their lives to help win the freedom of enslaved Americans. A sign, describing the battle, was placed outside the lodge by the Island Heritage Foundation in 2006.

Other parts of Sol Legare’s history are not so glorious. An area for swimming known as Mosquito Beach was created during a time when African Americans were not allowed to swim with whites on Folly Beach.

“In the 1950s, the community built a boardwalk on Mosquito Beach which was called Harbor View. It imitated the boardwalk from Folly Beach,” recalls Bill “Cubby” Wilder, a former James Island Town Councilman and member of the community who has worked to preserve and recognize Sol Legare. “Everybody was flocking to Mosquito Beach. When tide came high, you couldn’t find a more beautiful beach.”

Today, the stretch of Sol Legare Road still almost exclusively consists of generational homes largely owned by African-Americans. Most of the parcels are still under the ownership of the original farming families.

Their own slice of marsh views stretch for 2.5 miles along a curved road. It includes a view of the legendary Backman’s Seafood shrimp boat, which serves as a shining reminder of the entrepreneurial spirit of Sol Legare citizens.

Colorful, hand-painted signs point to Mosquito Beach, which currently is home to a small restaurant and bar. The area remained one of the last sustainable Gullah-Geechee communities in the area.

Sol Legare faces a modern threat, one that threatens communities throughout the Charleston area. Development is now encroaching on the community — the 36-unit King’s Flat home development is under construction at the entrance to Sol Legare.

Community leaders and elected officials, however, are trying to make sure the history and heritage of this special place isn’t lost.

Bright turquoise signs at the intersection of Folly Road and Sol Legare Road were recently dedicated to let residents and visitors know that there is an important historic community tucked behind the new development. The City of Folly Beach worked out an agreement with the developer to place the signs up at the road’s entrance.

“It was prudent to put information there, so people know the community exists, and that there’s a lot of history down there,” said Folly Beach Mayor Tim Goodwin. “There is a lot of history to be proud of in Sol Legare. Getting the signs up was a process we went through, telling the developer that they are impacting the area and these people, so, let’s do something to highlight the community.”

David Tomblin, with the Tomblin Company, a local landscape architecture firm hired by the King’s Flat developer, was tasked with creating the signage.

The signs indicating historical sites include Mosquito Beach, Backman’s Seafood, The 54th regiment, and the Seashore Farmers Lodge, along with a “Welcome to Historic Sol Legare Community” sign. A ceremony was held to unveil the signs in mid-July.

“David (Tomblin) did an outstanding job in understanding the heritage and history around here. He attended meetings and even went as far as renting a boat to take a picture of the Backman’s Seafood shrimp boat from the water,” Byrd said. “It’s very important for me to see these signs go up, and I love for people who actually drive by to know about the area.”

He added: “People who drive down this beautiful island now have an idea about where they are with these landmarks. It’s important for me to not let the work of our elders and everything that they’ve done out here be in vain. We didn’t want this community to be lost, and it’s important with that type of development going up in front of the community, to let everyone know our history, and most importantly, our heritage.”

Sol Legare community members are continuing to push to preserve the area’s heritage with national recognition to compliment the local attention.

The Mosquito Beach Historic District, a strip encompassing three historical sites and four other buildings, is up for consideration to be listed on the National Registrar of Historic Places by the S.C. Dept. of Archives & History. It includes the site of an oyster factory that operated for a decade in the 1920s. It employed local residents to shuck and package oysters.

The application states: “The buildings, although simple and vernacular in nature, retain original finishes and detail, and their arrangement within the preserved landscape of Mosquito Beach, as well as the surviving remnants of the boardwalk, still reflect the original intent for the strip: a place of socializing and congregation.”

Wilder, who pushed for the designation, traveled to Columbia in late July to attend the board’s consideration (after press time).

The annual Sol Legare family fun day was held also held late last month, with reenactments of the 54th regiment and a program of the Gullah-Gechee culture, as well as food and games.

“People need to know the history of what happened here,” Wilder said. “This is our Gullah-Gechee Corridor, and it’s very important to our young people to know where we came from.”