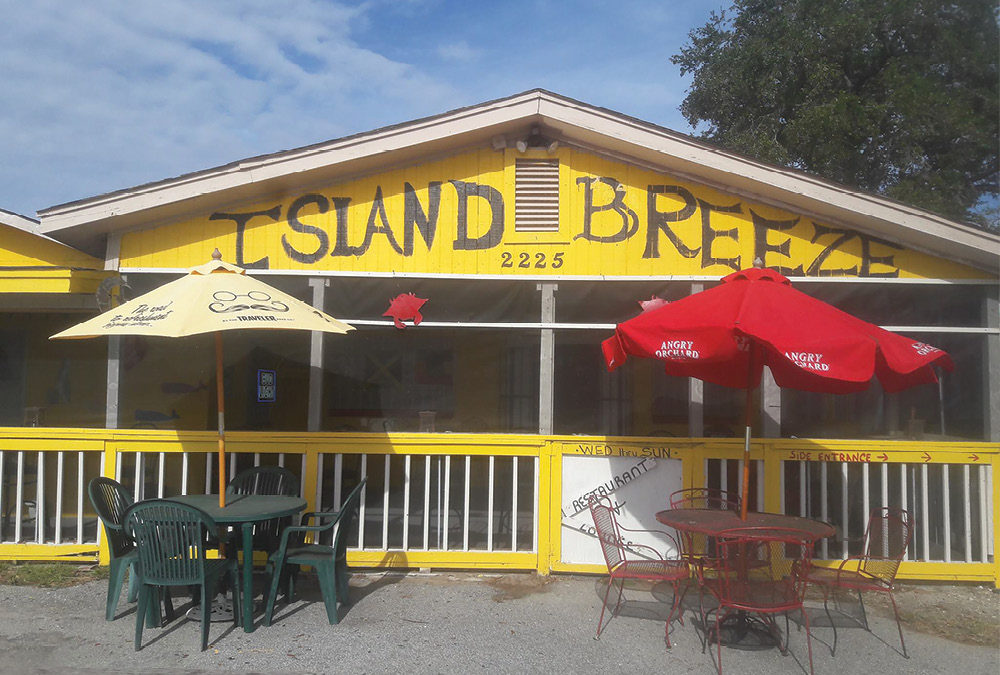 To talk about Island Breeze restaurant, you must first talk about Mosquito Beach on which it’s located. Just off of Folly Beach, a little ways down Sol Legare Road is a tucked away neighborhood with a mixture of small businesses, residences, and abandoned buildings. Mosquito Beach, the waterfront “beach” faces a tidal creek with marshland and plenty of pluff mud and was aptly named for the plentiful insects that call it home.

Back in the 1950s during segregation, Folly Beach was a “whites only” beach. Just up the road in Sol Legare, Mosquito Beach opened the Harborview Pavilion to welcome nearby blacks to come and enjoy the small strip of water rather than them having to travel to further places such as East Cooper beaches where they were allowed. A couple of restaurants and nightclubs soon followed, and even a small hotel opened to provide accommodations to encourage the beach-like atmosphere.

Unfortunately, a string of violent occurrences in the area sparked the downfall of the popular hangouts. Then, of course, came Hurricane Hugo, which basically wiped away everything that the community had worked so hard to build.

However, recently there have been some interesting things happening in Sol Legare that are offering a gleam of hope in restoring the once-vibrant community. HBO just filmed a portion of their new original series The Rightous Gemstones at Mosquito Beach over the summer, starring Danny McBride and John Goodman. More importantly, the National Park Service just granted nearly $500,000 to restore the Pine Tree Hotel, which will offer multiple rooms and shared spaces for travelers and will serve as an educational destination to offer a glimpse into the past.

The small history lesson is imperative when talking about Island Breeze restaurant, which was opened by Norma Lemon in July of 2016 with her partner Norman Khouri heading up the kitchen. Many see the restaurant as the start of bringing business and economy back to Mosquito Beach. It has become a popular meeting space for folks within the community as well as Folly locals who know it is THE spot to get the best jerk chicken around and one of the only places to get properly prepared Oxtail. Since Norman is originally from Jamaica, you can bet that spice and flavor are all over the other menu items as well. (Disclaimer, I’m admittedly a sauce-y kind of girl — beurre blanc is a must with any scallops, my wings have to be dripping in sauce, and extra spicy cocktail with shrimp is my go-to — but the fried shrimp at Island Breeze are absolutely perfect on their own, no sauce required).

The brightly painted facade matches the outgoing personality of the people who frequent and are employed there. One thing to note, hurricane seasons aren’t always nice to this waterfront restaurant. According to Lemon, Dorian brought a headache when the kitchen was flooded which caused them to lose their cooler and freezer. They were fortunate enough to co-host a Bahamas relief fundraiser and raise over $11,000 with the help of Liz Oakley and the Southeast Rescue & Relief team, even in the midst of their own kitchen downfalls. They were able to re-open last weekend with a limited menu, but they are still in need of kitchen repair themselves, so a GoFundMe page was started which you can find on Norma’s Facebook page to assist them with their damages. While you’re there, check out the daily specials to plan your next meal there.

If you’ve never tried this eclectic place before, I highly suggest doing so sooner rather than later before any other natural disasters put a pause on it. This Caribbean restaurant & lounge is a breath of fresh air, a place you go to relax with a beer and live reggae, where the food comes from the heart, and the laid-back atmosphere’s not bad either.

Jessica Cobb is a Folly Beach resident with years of culinary experience tucked into her apron pocket. A classically-trained chef and owner of local catering company, Some Like it Hot, she joined the Folly Current as a contributing writer to the Dining section in 2018 as a way to create interest, cravings, and insight on the eclectic Folly dining scene.