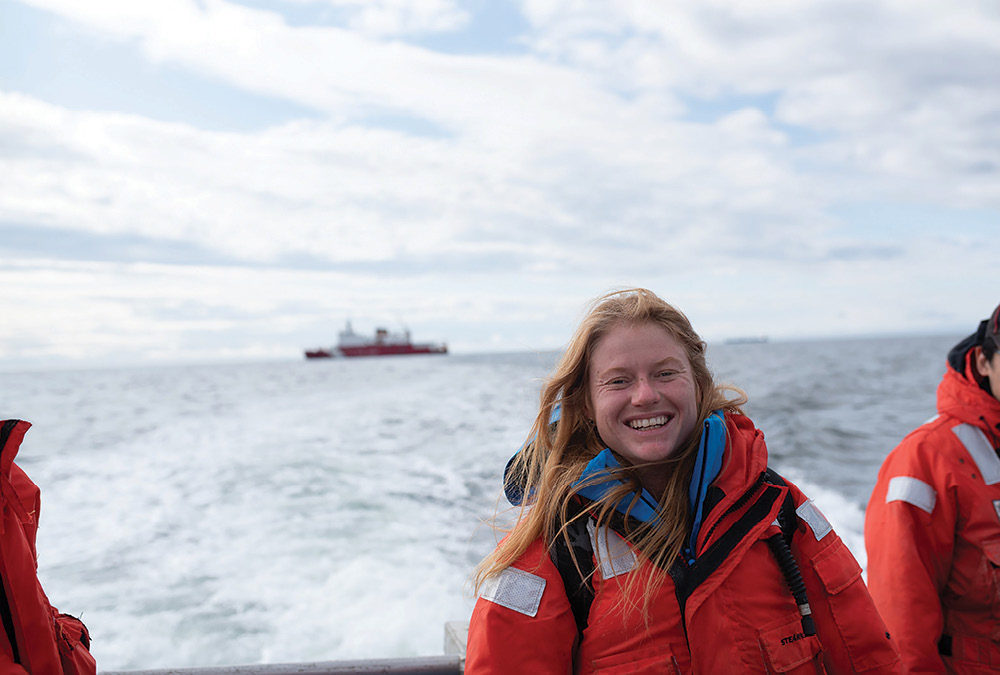 By Lindsey Graham | Special to The Current

The initial communication started off as in inquiry into my pricing and availability to shoot her upcoming wedding. We hit it off and exchanged numerous emails, throwing in personal tidbits along the way. As a wedding photographer I was excited about an opportunity to shoot a Gadsden House wedding, I was not anticipating the adventure that would follow instead.

It surfaced that the bride-to-be was the Program Manager for the National Oceanic and Atmospheric Administration (NOAA) Arctic Research Program. My curiosity piqued. As a former biologist and wildlife geek, I’m fascinated with the Arctic. Half joking, I offered my photography services should their program ever have a need.

Fast forward six months, and what I put out into the world somehow made its way back to me.

As part of the summer 2019 expedition I was offered a spot as photographer aboard the U.S. Coast Guard Icebreaker the Healy, along with 40 other scientists and 80 members of the Coast Guard, to document science operations for NOAA. No hesitation, my schedule was clear, I was headed to the Arctic.

I didn’t know what I was getting myself into but I spent the next few months planning, watching videos, buying gear, researching the ongoing science projects, and contacting some of the other people coming aboard. Most of the scientists were women, 30 out of 40 to be exact. It was incredibly empowering, and I was really excited.

We were to depart from Nome, AK and steam as far as 75 degrees north, performing science operations along the way at designated Distributed Biological Observatory (DBO) locations, before making our way back to port. As part of this DBO monitoring system, standard samples are collected in areas of high biological productivity and studied for physical and biological changes in response to warming temperatures and retreating sea ice. Some of these sites have been sampled for over a decade, creating a long-term marine observatory system.

Dramatic changes in both the physical and biological systems of the Pacific Arctic region have been recorded by scientists and local observers over the last several seasons. During our expedition change was apparent, even as far as 75 degrees north, an area with normally permanent ice cover, we never encountered any sea ice. It was also an unprecedented year for mass mortality events in both marine mammals and birds. The increase in temperature and decrease in sea ice is likely to allow the growth of harmful algae, which can contribute to making food sources toxic.

Research during our month-long expedition entailed tracking ocean currents, collecting mud samples from the seafloor, sampling for plankton, testing water for harmful algal blooms, collecting temperature/salinity/depth readings, and observing marine mammals and seabirds. There was a lot of heavy machinery involved and with 24 hours of daylight, science operations happened around the clock.

Along the way we encountered a lot of incredible wildlife. Walrus, orcas, minke whales, and bearded seals left me speechless, and without another ship in sight for three weeks, the air truly felt wild. Despite the Arctic being rather untouched, there was still the ode to civilization with a sprinkle of ever lasting plastic bobbing on by every so often.

It’s apparent that things are changing, and the climate is shifting. It was incredible to witness the wildlife, the science, and meet the people working towards understanding what this new climate means for the future.

I have yet to shoot the Gadsden House wedding, but after such an incredible trip, the pressure is on!