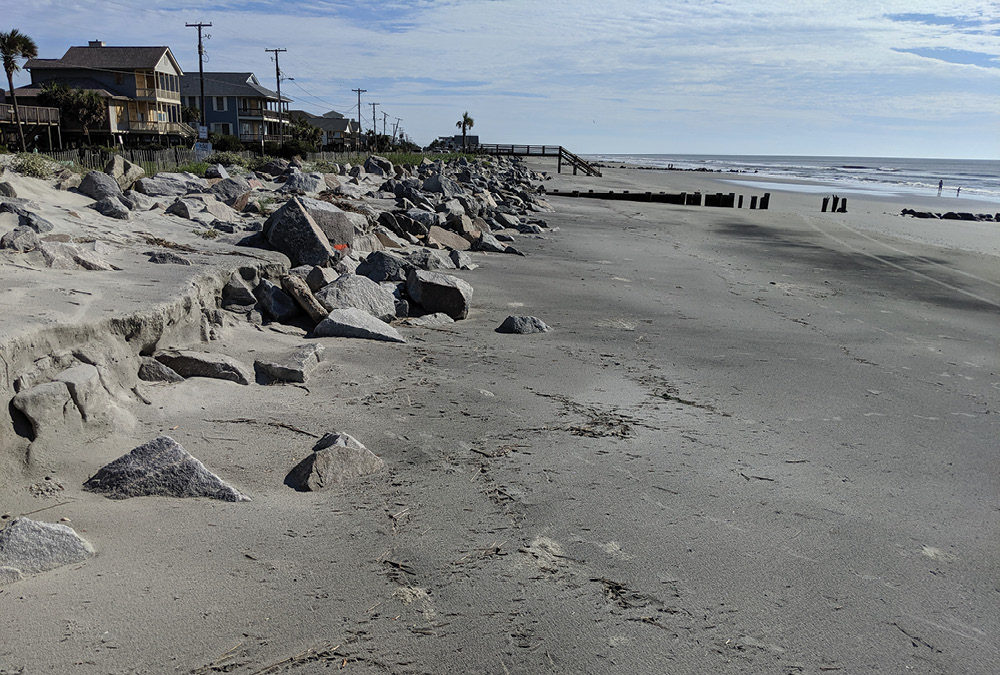 Folly Looses sand …. but it could have been much worse

Folly Beach’s beach lost close to 150,000 cubic yards of sand, enough to drop the elevation as much as three feet in some sections last month, thanks to Hurricane Dorian, according to the city’s beach erosion consultant.

That amount represents about one-tenth of the amount of sand that was replaced during the last renourishment, according to city administrator Spencer Wetmore, which she said was par for the course in the wake of a hurricane.

Wetmore says that an application will be filed with the U.S. Army Corps of Engineers to replace the sand, but does not know if the amount of loss is enough to trigger an additional renourishment.

Wetmore says if the Corps turns down the request, it could be later mitigated in a bigger renourishment project request.

Erosion specialist Dr. Nicole Elko said the concentration of the sand loss was “surprisingly enough” between the 6th and 8th blocks on both the East West ends of front beach.

In the past, the majority of sand loss from major storms have occurred at both of the ends of the island, sometimes taking the beach back down to the sea wall or even swallowing dunes.

Back in June, before hurricane season started, Elko dispatched a survey crew to the beach and had them study multiple cross-sections from the street, over the dunes and into the first few feet of the water at high and low tides. There were actually 31 different spots, to be accurate, that were sighted on each survey cross-section.

She then compared the data to come up with an accurate understanding of how the beach was “behaving” in relation to erosion and accretion. She made sure to further document the data with pictures, so there would be fewer potential questions about the quantity of sand lost during hurricane season.

Having reviewed the data, Elko now says that those two stretches of the beach lost anywhere from one to three feet in elevation height “from the toe of the dunes out to the edge of the water.”

The good news is that much of the work done in the past was successful, as dunes held their place in many spots, and further protected the beach from deeper harm.

Elko, who is in her seventh year with the city, says the amount of sand lost could be easily replaced with a month’s worth of dredging.