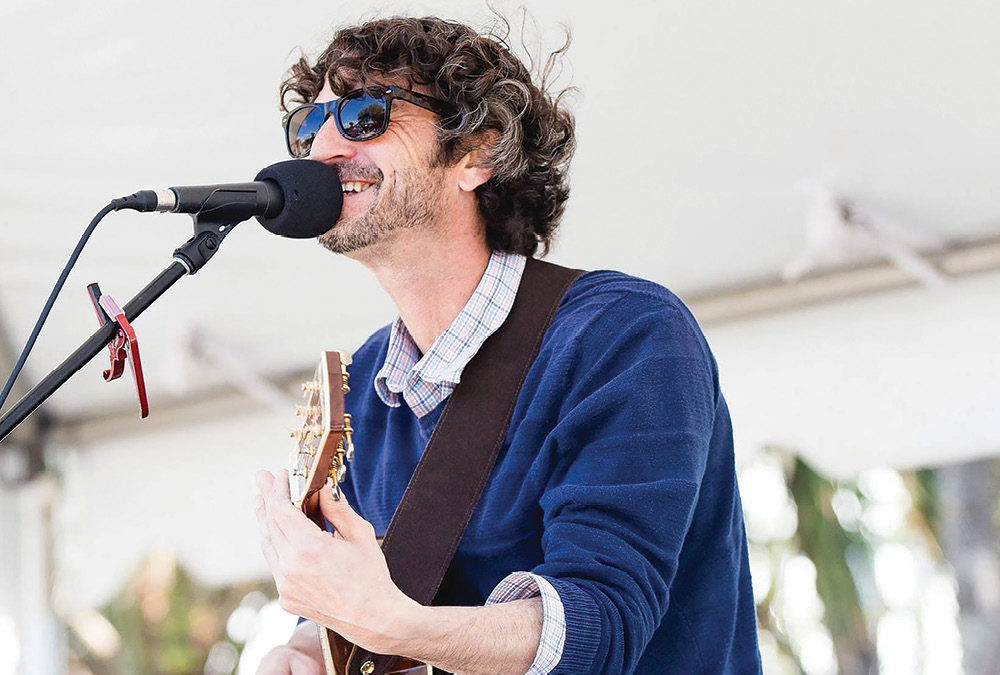 During the time of this interview, Champagne was, in Trois-Rivieres, Quebec, Canada, touring the Great White North. He jokes about getting back to his roots by visiting Forges-Du-Saint-Maurice, which is connected to his French heritage … the Champagne region, of course.

Champagne is not actually from France or Canada, he was actually born in and grew up along the Gulf Coast in Beaumont, Texas but claims that his Louisiana bloodline from Lafayette makes him “100-percent Ragin’ Cajun.”

The Texas native recorded the vocals on his third EP Love locally at Fairweather Studio, which is run by the Omar Colon, who also owns Bert’s Market on Folly. Colon also engineered the recordings. He worked with Jimmy George, who mixed Love locally, but the audio track was actually recorded out West at Roost Studios in Austin, Texas. Famed Brazilian musician Duda Lucena mastered the tracks at Borboleta Audio.

Champagne describes his sound as a mix of Texas country, New Orleans funk, and beach music, such as reggae and calypso. Although his music isn’t exactly reggae, he has been nominated for the title Best  Reggae artist by Charleston City Paper for the past four years.

The Texas native says he loves living on Folly Beach. “Everyone accepts everyone for who they are,” he says, pointing out that it is in stark contrast to to the cutthroat music scenes in Nashville and Austin. Champagne says that Folly musicians are more likely to help each other. “I moved over here and it was a community. It’s super great because a lot of people are working together here,” he says.

While in college at Texas A&M, Champagne landed an internship at Willie Nelson’s Family Studios. During the two years he worked there, he learned a lot about audio engineering, as well as the business side of the music industry. Champagne considers Willie Nelson, Waylon Jennings, and Jerry Jeff Walker influential musicians to him.

“I never played country music before. Growing up in Texas, I was surrounded by it,” he says. “Then it became nostalgic when I moved here.” Champagne says he enjoys playing the music of other Texas artists, such as Lyle Lovett and Robert Earl Keen.

In addition to Champagne’s singing and guitar work, Love features vocals by local songbird Whitney Hanna, who appears in the music videos from the tracks “Candy” and “Talk.” Both videos were directed by Champagne’s friend Hector Salazar. The video for “Talk” was filmed at Planet Follywood and even features a special on-screen appearance by longtime Follywood bartender Matty Dorman.

The “Candy” music video was filmed all over Charleston and features a Hawaiian Luau Party Scene filmed at Chico Feo. Thomas thanks local surfboard maker Liam Becker from Shred Season for donating boards to use as props.

Champagne sings and plays guitar on all four tracks with guest appearances by Matt Muehling on electric guitar and Robert Slangen and Jonathan Peace on percussion. “I’m very proud of the team … they worked really hard on it and it turned out greater than I expected,” says Champagne.

Playing with a big band becomes difficult when traveling around North America, so Thomas charted out all of the horn parts so that he is able to hire local musicians to play his music while traveling on tour. “I want them to be themselves, so I tell them, ‘Here’s the framework, here are the notes. Have fun,’” says Champagne.

You can catch Thomas Champagne live at Planet Follywood every Wednesday in October.