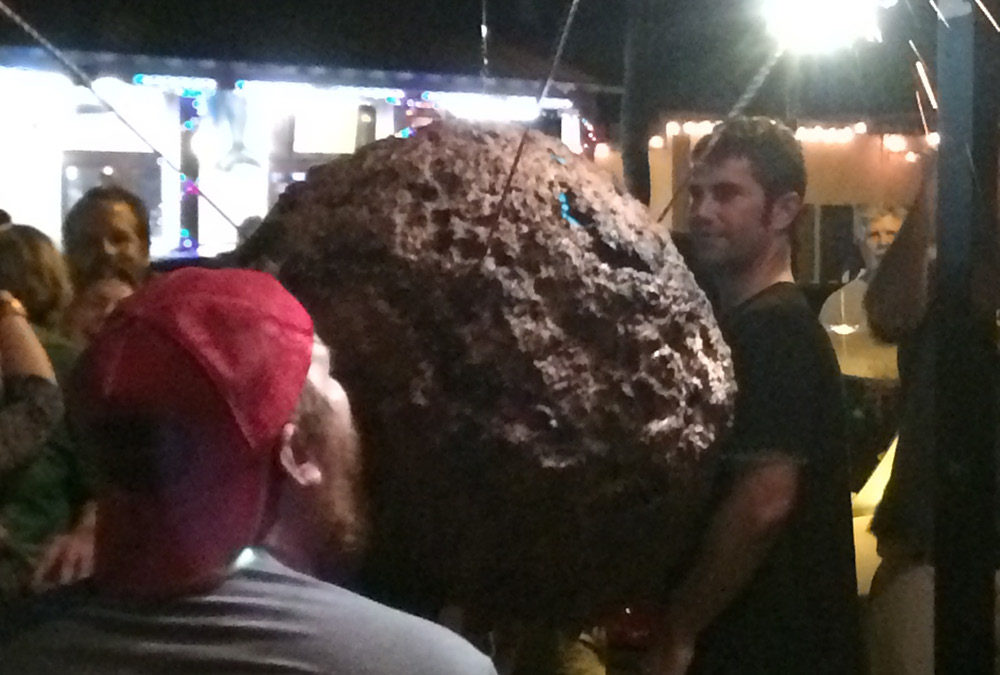 Once again, there will be different kinds of crowds celebrating the ringing in of the new year on Center Street come midnight, Dec. 31 on Folly Beach.

Down by Tides, a diverse crowd described by Mayor Tim Goodwin as “ages 8 to 80, men, women, children and grandparents” will gather for the annual Flip-Flop Drop, a tradition that began nearly a decade ago when his wife, Charlotte was head of the committee.

And down by Woody’s Pizza, a more “adult” crowd will celebrate the lowering of an enormous meatball for the 15th year in a row.

Goodwin describes this year’s flip-flops as two 8-foot by 4-foot welded flats, that are covered in lights and tinsel and mesh, so the wind can pass through them “and so they won’t turn into 8 by 8 sails high up in the air.”

Originally, the flats were hewed from two sheets of plywood, but a retired James Island County Park employee who worked on their annual holiday lights show has fabricated the safer flip-flops.

As usual, the flops will be lowered from atop the fire department’s tallest ladder truck. Followed by a dazzling fireworks display to ring in 2020.

And for the first time ever, the meatball will make its descent from inside the crowd fencing, as Public Safety has extended the stretch of Center Street to include their festivities.

Mayor Goodwin says it’s required to block off the street because “of all the crazy people around the world driving cars into large crowds of people.”

The street will be blocked off from a little after 11 p.m. that night to just after midnight that night … er … next morning … er … year. Whatever.

Why? According to Webb, it’s nothing like the restaurant’s usual tasty meatballs, but rather an under-seasoned glob of ground beef affixed to a chicken wire ball with the help of breadcrumbs, eggs and other binders.

“Let me be clear: this is not a representation of the meatball on our menu,” says Webb. “In a perfect world, it would, but …”

The enormous, 40-pound ball is too tall and robust to fit in the narrow profile of the pizzeria’s ovens, and has to be trucked in from a buddy’s commercial bakery oven in West Ashley.

For years, Webb says the meatball was all-meat, especially back when they first started the tradition with a menu meatball tied to a bat. But as the size of the meatball and the gathering had grown, so has the rig.

And, yes, there have been times the meatball has hit the ground before it was supposed to. This caused some last second surgery before it could be re-hoisted and dropped properly.

And, yes, people have taken huge bites out of the meatball in the past. “Who eats it? The people who you think would be the kind to eat it, eat it.”

This year, though, they might not want to bite too deeply, as Webb will employ a “shark rig” to lower the meatball, replete with wire cable inside of string. “Over the years, we have learned a few things,” he says.

Mayor Goodwin admits that he’s never seen the meatball drop. And he probably wouldn’t see the flip-flops descend either, if it weren’t for his wife starting up that tradition.