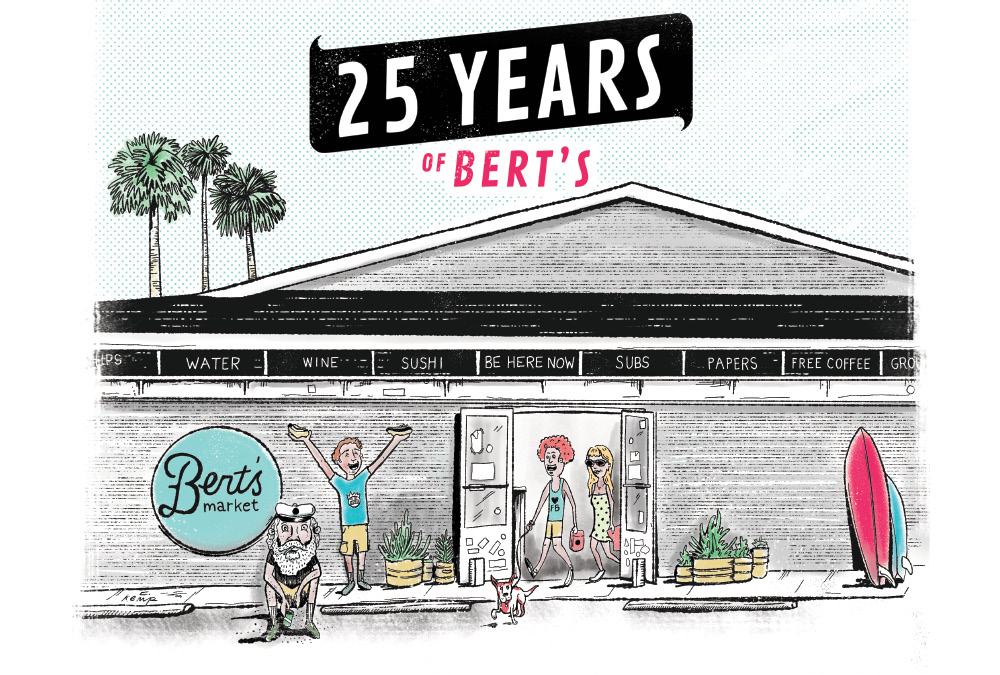 Last month, Bert’s Market, the beloved 24-hour independently-owned grocery store, with colorful characters both behind and in front of the cash register, celebrated 25 years on Folly Beach.

Located one block from the beach on East Ashley Avenue, Bert’s has strictly adhered to a “No shirt, No shoes, No problem” attitude over its quarter-century existence.

The store’s lovable motto is “We May Doze, But We Never Close!” Cashiers at Bert’s know regulars by name, and vice versa.

Even dogs are welcome at Bert’s and are usually given a complimentary treat. Most dogs, when they sense they are near the store, start pulling on their leashes, eager to get inside.

In fact, a couple years ago Folly Current owners Lindsey and Lorne Chambers’ beloved, elderly, seeing-impaired Jack Russell mix slipped out the back gate of their home on East Hudson Avenue. Guess were he ended up? Bert’s.

Bert’s manager Johnathan Woodham said the store’s longevity it a testament to its loyal customers. He said that Bert’s has always been – and always will be – fueled by Folly’s hyper-local community.

“Ninety percent of products sold in our store are there because customers asked for it – the other 10 percent are things owners are passionate about,” Woodham said. Long-term products include special orders – like no-salt potato chips for a customer on a low-sodium diet. It’s still stocked today.

The well-appointed store carries Folly Beach-specific basics, like surf wax, bait, and guitar strings, along with grocery staples, paper products and over-the-counter medicine. Everything’s for sale, no matter the time of day or night.

Coffee, cappuccino and hot chocolate is always free or donation-based. That’s so those who can’t afford a cup can still enjoy a hot beverage.

A long-time employee who works the night shift, known as “Ms. Leigh” is a smiling face no matter the time of night.

“Ms. Leigh, loves working nights and has her own cult following of customers,” Woodham said. “People will come in just to talk to her.”

Comments on a Facebook post about sharing Bert’s memories show that “Ms. Leigh” is the most recent of a long line of beloved cashiers at Bert’s Market.

“It’s about hiring the right people, who fit in the culture of Folly Beach, that is one of the biggest draws; everybody feels like it’s a community,” said Woodham.

Bert’s Market celebrated with a special “Thank You” to over two decades in business in February offering their boiled hot dogs with a bun and all the fixin’s for just .25 cents.

Bert’s Market is now owned by Julia and Omar Colon, the second generation of owners. Julia’s father is Bert Hastings, the first owner, whose likeness is painted on the side of the building.

Woodham said the former owner still comes into the store weekly, personally greets all employees, and stocks up on his favorite items.

“Everyone is astounded when they find out it’s Bert, and that he still pays for all his stuff. Even when he owned the store, he always went to the cash register and paid just like any other customer,” Woodham said. “People would say, ‘You are Bert, you don’t have to pay,’ but that’s something he always did to show people that he’s just like everyone else.”

The market has added new offerings over the past 25 years. The Wooden Spoon is a counter-service deli making and selling unique and vegetarian-friendly sandwiches, one that features potato chips between two slices of bread.

A draft beer area lets shoppers fill a growler with a local brew, while an ice cream and pastry counter draws customers in with cakes and other sweet treats. Grab-and-go breakfast biscuit sandwiches and both regular and spicy chicken is popular with the morning and late-night crowd.

New additions on the horizon will include a build-you-own-waffle bar and the addition of milkshakes to the store’s ice cream counter, Woodham said.

“It’ll have waffle irons, fresh fruit and syrup,” he said. “There will be hand-scooped milkshakes with the regular Wholly Cow ice cream flavors as well as specialty milkshake flavors like cheesecake.”

Yet, no matter what, one thing that will never change about Bert’s Market is its deep commitment to the Folly Beach community.

Every Thanksgiving, Bert’s offers a free meal for anyone in the community – turkey plates, hearty sides and even dessert. Employees cook the meal themselves and hand them out in front of the store to anyone and everyone.

Employees installed a “blessing box” outside the store with non-perishable items, so that people who are homeless or even having a hard month during the slow season can get something to eat, said employee Caroline Hatchell.

During hurricane season, local residents use Bert’s Market as a gauge for deciding if they should evacuate or not. Locals know it’s a serious storm if Bert’s Market boards up its windows and deviates from its 24/7/365 schedule.

In typical Bert’s Market fashion, the several occasions that a storm caused the store to close, it opened its ice cooler and gave away its bags of ice to those who decided to ride out the storm and wrote an encouraging message on its giant outside chalkboard outside.

Everyone at Bert’s takes pride in the store, from the employees who are like family, right down to the customers, Woodham said. There are countless stories about Bert’s coming through in a time of need, including a mother who showed up in pajamas and a robe at 2 a.m. needing medicine for a sick child.

A knowledgeable cashier personally helped her find the exact items she needed.

“They were SO KIND. I will never forget it,” said Ann Hail via Facebook.

“The people, the atmosphere, and the customers who come in, really feel like family,” Woodham said. “Customers are so loyal that when we bring in new people during the busy season, the customers will take time to help train the newbie—even coaching a new cashier on how to ring up their bagel. The atmosphere is chill and relaxed, and I love that we get to really talk to customers. I feel really lucky.”

And Folly is lucky to have Bert’s, too.