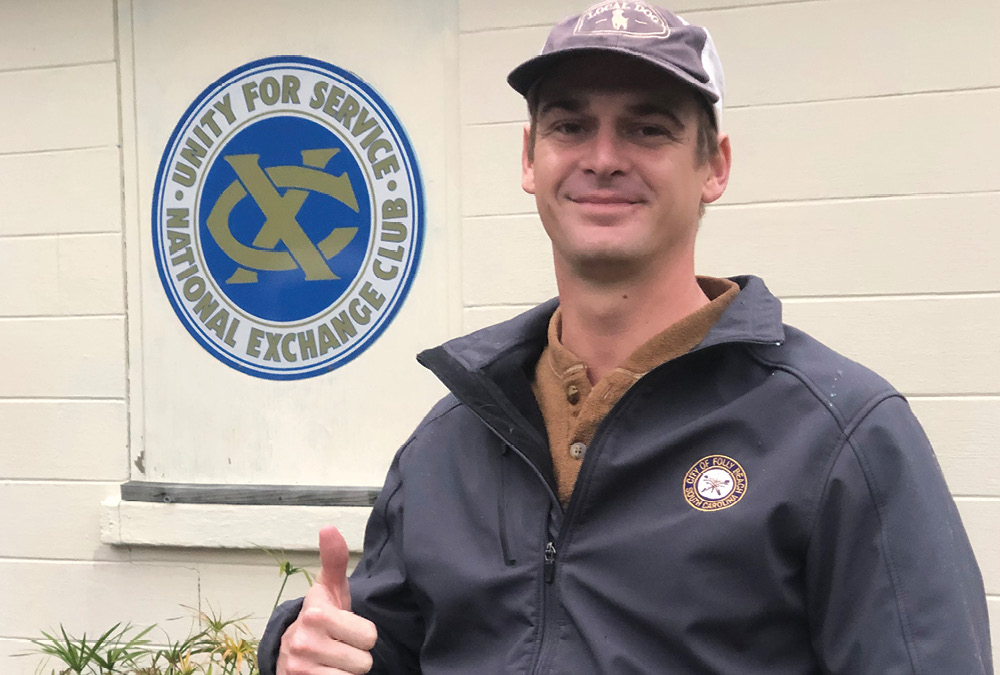 Folly Beach Exchange Club president John Merritt never met his grandfather. But he feels his presence every time he walks into the club’s old cinderblock building (aka The Hut) on West Indian Avenue.

“Sometimes after an event. After we grill dogs or whatever, I’ll come back here when everything is quiet. I’ll sit down and it just kind of hits me,” says Merritt, who now holds the position that his father’s father, Hugh Merritt, held back in 1976-1977. Almost 45 years later, John is now the president of the Folly Beach chapter of the Exchange Club, the oldest service organization in the United States. Merritt’s grandmother was also an “Exchangite” as was his father.

The Folly Beach Exchange Club literally has dozens events and service projects every year that they contribute to, ranging from putting out flags for July 4th, Memorial Day, Veteran’s Day, Patriot’s Day, and Labor Day to volunteering for local charity events, hosting barbecue fundraisers, and issuing awards to public safety workers and scholarships and school supplies to students.

Community Service is a tradition in Merritt’s family. A legacy that the younger Merritt has inherited and something that resonates. “I feel like my grandfather kind of built a path that I’m hopefully following,” he says. Hugh Merritt, ran the A&M Market on Folly Beach, located where St. James Gate is now. And in addition to serving as president of the Exchange Club, he also served as president of the Rotary Club, and Treasurer of the Civic Club.

Merritt is doing his best giving back to his community the same way his grandfather did. In addition to serving as the Exchange Club president, he has also spent six years on the Folly Beach Planning Commission, volunteers for the Folly Green Team, is a member of Our Lady of Good Council’s Mens Club, and is involved with the Folly Beach Civic Club, as well as helping out with other Folly activities throughout the year. Merritt has even twice run for City Council, once in 2014 and again in 2016. While unsuccessful in both attempts, he doesn’t rule out a future stab at local politics.

“Never say never,” says Merritt, who has quite enough on his plate at the moment.  But he wouldn’t have it any other way.

“Sure, I like to have fun. Everyone likes to have fun. But this is something that I want to do and enjoy doing in my spare time,” he says. “You know how some people feel bad when they don’t go to the gym one day? I’d feel like that if didn’t do something for others. I just get a real satisfaction when I get up and know I’m doing something nice for my community.”

On this particular day, Merritt is sifting through the piles of items that will be part of the Exchange Club’s annual Yard Sale, held on Saturday, March 28th at “The Hut,” located at 206 West Indian Ave. Amidst the rubble of sale items, Merritt finds one thing that is definitely not for sale. It’s a poem his grandfather wrote several decades ago. It’s been mounted on a slice of a large pine tree that fell during a storm, narrowly missing The Hut. The poem entitled “The Tree had Merritt” humorously recounts the ordeal. Merritt treasures the poem and the stories that older members still tell him about the man he never met, but shares much more than a name with.

Not only is public service in his blood, but Folly Beach is in Merritt’s blood. Family folklore has it that Merritt was conceived at Sunset Cay during Hurricane Hugo. Being in a military family he moved around a lot as a kid. But having deep family ties on Folly always made the island home to him. In 2008 he moved her permanently. Not only did his grandparents run an old market on Folly, but his great aunt, Ruth Young, was once the oldest Folly resident. Merritt says he was very close to his aunt and she helped instill his love for Folly Beach. But it is his admiration for a grandfather whom he never met that pushes down a path of community service.

“Recently my dad told me that my grandfather would be proud of me. That really means a lot,” says Merritt.