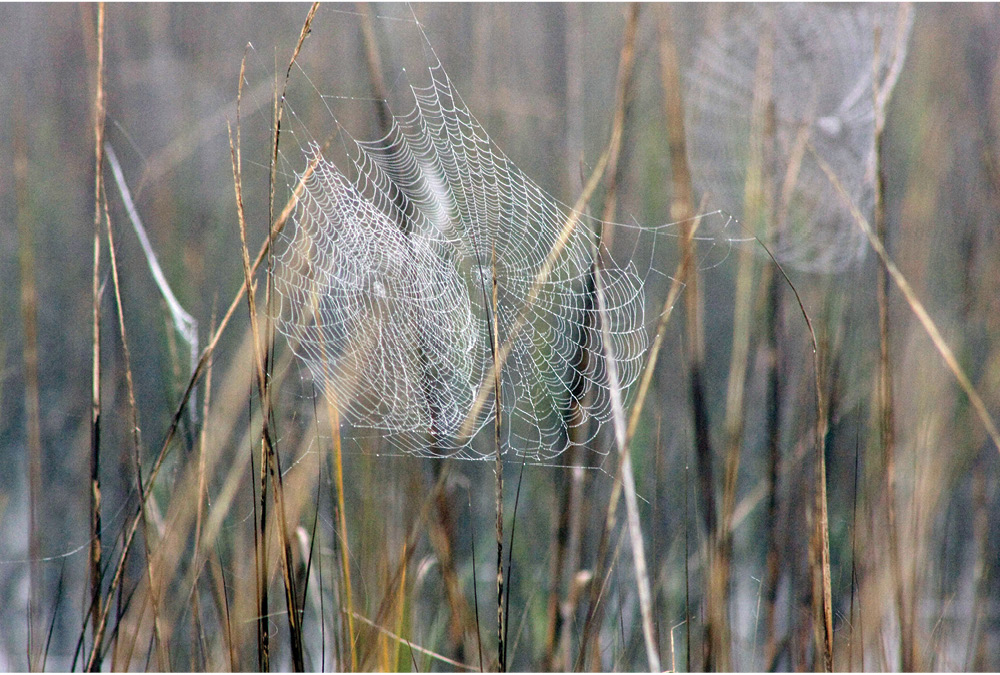 Driving through the morning fog, back onto Folly Island a few Sundays ago, I noticed hundreds of ghost-like orbs distributed among the top third of the spartina grass. These orbs were spider webs. Tiny water beads from the fog had condensed on existing spider webs, making normally-invisible webs visible.

I’ve seen spindly-legged, long-body spiders on the boat from time to time, but never considered that these spiders actually lived in the marsh. I figured they’d quickly perish, removed from their perceived habitat, if they lost their grip and fell into the tidal creek. Turns out they do just fine, mostly.

The marsh hosts a largely invisible and diverse ecosystem, much of which falls within the Linnaean phylum Arthropoda. Consider for a minute how many different types of exoskeleton-sheathed arthropods live in the marsh. Blue crabs and China-back fiddler crabs come to mind. We also find mud crabs, squarebacks, and stone crabs. White and brown shrimp, both with exoskeletons, are arthropods. So are spiders and insects.

Several species of spiders live in the marsh. Some weave webs and some forage for prey. Other species fold leaves together into traps. Larger spider species sometimes eat members of smaller species. Adults often eat juveniles of their own species. Larger juveniles even eat the smaller juveniles.

Rising tides prompt some spiders to escape the water by crawling toward the top of the thin spartina blades, exposing them to birds, wasps, and other spider predators. Other spiders choose to submerge as the tide rises over them. All have some defense or escape mechanism.

Spider abundance correlates with leaf-hopper insect abundance. More food means more spiders. Less food means less spiders. Predation also influences spider numbers. When the marsh refoliates with new-growth spartina in the spring, and perigean tides wash away much of the winter’s detritus, spiders lose some cover. This exposure to predators, including other spiders, results in a seasonal crash in spider abundance.

L. R. Pomeroy and R. G. Wiegert, editors of The Ecology of a Saltmarsh, found that spider abundance increased in late winter during a Sapelo Island, GA marsh study. Maybe this is why I saw so many webs recently on that foggy February morning.